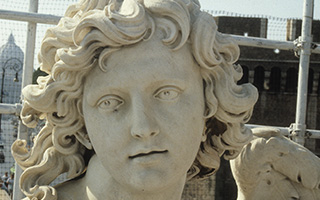 ICCROM Archives do not only keep records produced by the Organization itself but they also preserve archives donated by well-known conservation professionals, such as Gaël de Guichen, Rodolfo Luján-Lunsford, Peter Rockwell and Giorgio Torraca. These donations include paper and digital records but also photographs, didactic material and heritage material samples. They are extremely valuable not only for their scientific and historical significance, but also because they constitute the integration and completion of other series of records already existing in the Archives.

Finally, the ICCROM Archives host the archive of the International Committee for the Conservation of Mosaics (ICCM). This is composed of the records produced during the ICCM Secretariats by Gaël de Guichen (1978-1986), Peter Johnson (1986-1989) and Bettina Elten (1989-1996). In addition, it contains records produced during the Presidency of Demetrios Michaelides from 1996 to 2014. This section of the archive, which was transferred from Cyprus to ICCROM in September 2015, is composed of paper records but also includes photographs and audiovisual material, specifically tapes of the VI ICCM Conference, Nicosia, Cyprus, 24-28 October 1996. It also contains records that refer to training projects on the conservation of mosaics in Cyprus by the Department of Antiquities of Cyprus and the Getty Conservation Institute between 1987 and 1996.

ICCROM also holds records related to the mosaics field and to the ICCM, which were collected by ICCROM staff and refer to: a) symposia and courses organized by ICCROM on mosaics conservation; b) ICCROM attendance to the ICCM board and conferences; and c) general matters on mosaics.