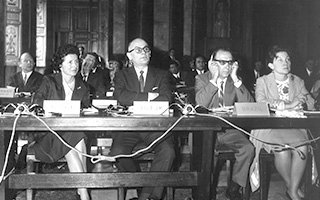 These are core records on the policy and decision making work of ICCROM General Assembly, Council and Office of the Director-General for the development of cultural heritage conservation worldwide.  This section also includes records concerning the creation of ICCROM and ICCROM’s relations with both Member States and partner institutions, such as memberships, joint agreements, correspondence and mission reports.

The series of the main records is as follows: