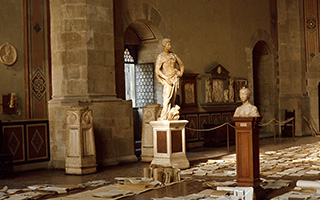 These records attest conservation assessments and interventions on heritage sites and objects of universal value, as well as ICCROM’s involvement in the establishment of regional and national conservation centres around the world.

Since its foundation in 1959, ICCROM staff has carried out thousands of missions all over the world. These international activities were, and still are, fundamentally important for acquiring first-hand information on the challenges and resources that exist in different cultural contexts within our Member States and, therefore, allowing us to provide relevant response through capacity building, field projects, advice or other means.

ICCROM has been a key actor as technical advisor in conservation projects of international and historical significance, such as the UNESCO Nubian Campaign for the safeguard of the sites and monuments threatened with underwater submersion following the construction of the Aswan dam (1960s), the preservation of the Maya wall paintings of Bonampak (1959- 1960) and the response to the destructive flood of Florence and Venice (1966). Fulfilling its mandate, ICCROM in fact has been acting ‘on the ground’ after various catastrophic events affecting cultural heritage, such as the earthquakes in Friuli (1976), Montenegro (1979), Campania (1980) and, more recently, in Iran (2003), Haiti (2010), Philippines (2013), Nepal (2015) and Myanmar (2016). Together with its network of experts, ICCROM has assisted in post-disaster recovery operations while also providing on-site training.

Furthermore, through its Technical Assistance Programme and the subsequent Technical Assistance Service, since 1979, ICCROM has been delivering publications, equipment, conservation materials, teaching tools and other supplies, to different institutions worldwide. This assistance, available to Member States, was particularly crucial in supporting developing countries.