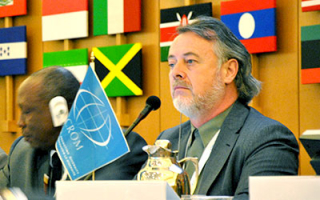 ICCROM has the pleasure to announce the winner of the 2019 ICCROM Award, Mr Grellan D. Rourke, Senior Conservation Architect, Heritage Services for Ireland. A graduate of from University College Dublin with a Bachelor of Architecture in 1977, Grellan completed a Diploma in Conservation 1978 at the Collège d’Europe, Brugge, before embarking on his career with the Office of Public Works in Ireland in 1979.  Over the course of his career his major work has been on the consolidation, conservation and preservation of the early medieval monastic settlement on the UNESCO World Heritage Site, Skelling Michael, co.Kerry.  Other key projects include the conservation and consolidation of three medieval castle complexes in co. Limerick and co. Kerry, Ireland. During the course of his career Mr  Rourke has published widely on his work.

Mr Rourke continues to share his wide breadth on specialist knowledge with teaching and lecturing in Ireland both at University College Dublin and Trinity College Dublin. He has also lectured abroad at York University, in Hungary, India, the United States, Bahrain and China. He has been a specialist consultant for the conservation and restoration of a medieval drystone oratory at the Glattjoch in Styria, Austria.

Mr Rourke has been engaged with ICCROM since 1981, from the time of his involvement as course participant on the Preservation and Treatment of Stone, Venice in 1981. Mr Rourke represented Ireland at the General Assembly since 2003 and from 2005 he was Council Member.

In this role, Mr Rourke participated in the drafting of ICCROM Governance Policies in 2007, which aim to assist the Council in playing its role more effectively. They outline the roles and duties of Council, and how the Council interacts with the ICCROM Secretariat, including the delegation of responsibility and monitoring.  In 2012, Mr Rourke promoted, as Chairman of the Council, the development of ICCROM Policies in the following areas: Training, Partnership, Expert, Selection, Staffing, Secondment, and Fundraising in order to guide decision making in the implementation of ICCROM’s strategic directions; ensure consistency and transparency of decisions; and enable evaluation and assessment of ICCROM activities. In addition, he was involved in the Amendments to the ICCROM Statutes and the Director-General's Selection Review Procedure.

In acknowledging Mr Rourke’s contribution to conservation in Ireland many strands must be brought together in an attempt to give some idea of just how multi-facetted his contribution has been both in Ireland and further afield. His input to the profession is inextricably linked to the organisations to which he has given time, energy, and above all expertise for many years.

Since leaving ICCROM’s Council Mr Rourke has continued to be a strong advocate for the Organisation, especially with other partner organisations such as ICOMOS.
ICCROM congratulates Mr Rourke on this distinguished and well-deserved award. Formal endorsement of the Award will take place on the occasion of ICCROM’s 31st General Assembly (30-31 October 2019).