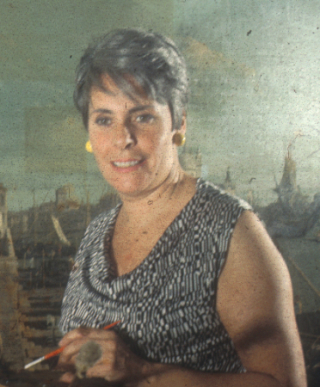 Laura Sbordoni Mora, famed paintings and mural paintings conservator, has died in Rome. She was 92 years old. A frequent collaborator and permanent consultant of ICCROM, she was a chief restorer at the Italian Istituto Centrale del Restauro (ICR), active in restoration over a period of more than 50 years, and was also my mentor, colleague and friend.

Born Laura Sbordoni, she was a fundamental part of a team of close collaborators that included her future husband and fellow conservator Paolo Mora. Also closely involved were art historian and critic Giovanni Urbani, and theorist Cesare Brandi who, together with Giulio Carlo Argan, founded the ICR, the principal Italian institute for conservation practice, in the late 1930s. Together they played a key role as researchers and teachers, in establishing modern conservation practice and in promoting the image of excellence in Italian restoration and restorers, now famous throughout the world.

Part of this image arose through the frequent joint projects and missions Laura Mora undertook for ICCROM: to conserve painted churches in Moldavia or the painted monastery in Piva, Montenegro, which had to be moved to a higher location to avoid dam construction; to clean and consolidate cave murals in Ajanta, India; to preserve archaeological remains in Pompeii as well as in Mohenjo Daro, Pakistan; to consolidate church frescos in Göreme, Turkey; to provide expertise on stucco restoration in Palladian buildings in Vicenza and Padua, Italy, and many other projects too numerous to list.

Laura Mora’s influence spread also through numerous teaching and training activities, not only through the regular courses at the ICR but also with ICCROM’s Mural Painting’s Course (MPC), started in 1975 under then ICCROM Director Paul Philippot, which the Moras helped to design and implement. Such a wealth of experience begged the issue of documenting and communicating their methods to a wider public. This the Moras did through writing and publishing, with Philippot as co-author and in collaboration with the ICOM Conservation Committee on the Conservation of Mural Paintings, the seminal work La conservation des peintures murales (in Italian La conservazione delle pitture murali, and in English The Conservation of Wall Paintings), which appeared in 1977.

Born in 1923, Laura Mora entered the Istituto Centrale del Restauro immediately after the war, in 1945. Early in her career, Cesare Brandi sent her to be trained in the studio of restorer Augusto Vermehren, where she learned the importance of careful objective study of the materials of a painting, preferably under a binocular microscope, before taking any action.

This was a point that she and her husband emphasized with me, in our frequent conversations over the years. Laura and Paolo always told me: “Dear Rosalia, guess whatever you like, but speak only after having touched the painting.” And I would reply, “Yes, let’s speak together, the conservator and the art historian, after we’ve guessed, looked into a painting and studied it, possibly together.”

The ability of their hands and the sensitivity of their eyes qualified the Moras for the most delicate restoration work, from ancient masters such as Beato Angelico and Duccio, to Renaissance masters such as Raphael, Titian, and Mantegna. Together the Moras restored works from very many important artists.

The Moras were also famous for the extraordinary educational role they played, not only for Italians at the ICR but for students worldwide through ICCROM courses, for their ability in cleaning and consolidation techniques, and for their unique method of approaching, and solving, the difficult problem of image restoration and presentation.

Laura’s great gift was to see, to grasp immediately the problematics of the object at hand, to discuss the best path forward together with her husband and colleague Paolo, and to guide the eyes and minds of her students, who were very numerous and spread throughout the world, towards understanding this way of working.

ICCROM and UNESCO both made liberal use of the Moras’ willingness to travel to teach or give advice on difficult problems. The Moras carried out missions in approximately 36 countries.

After the Moras’ retirement from the Institute (Paolo in 1986 and Laura in 1988), the Getty Conservation Institute, in agreement with the Egyptian government, awarded them the management and organization of one of the most complex and challenging conservation problems in the world: the consolidation and restoration of the mural paintings in the tomb of Queen Nefertari. This is the last project they carried out together before Paolo’s death in 1998.

Laura and Paolo Mora were recipients of the ICCROM Award in 1984, and also received the ICOM-CC Medal in Lyon in 1999.

Laura Mora died on Saturday 30 May, after a long illness. In the words of colleague Paolo Pastorello, she was an “autentica maestra nel ridare al bello la bellezza,” an authentic master in the art of restoring beauty to beautiful things. To me, this is a fitting tribute.