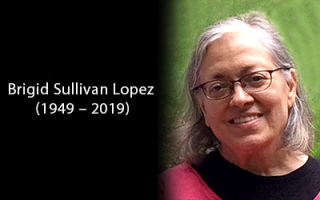 It is with sadness we report the death of Brigid Sullivan. Brigid was a participant on two of the courses held at ICCROM in Via San Michele in the 1980s and 1990s. In 1983 Brigid attended the Scientific Principles of Conservation course, and in 1993 the Conservation of Mural Paintings.

Brigid also attended the ICCROM Conservation of Architectural Painted Plaster course in 1988, at the San Antonio Missions National Historical Park in Arizona, USA, and in 1993 the course in Museum Climatology, Malaga, Spain.

Brigid spent 37 years as a conservator at the US National Park Service, finally in the role of Chief Conservator for the Northeast Museum Services Centre. Here Brigid was responsible not only for collections from Maine to Virginia, but also for Parks such as the War in the Pacific National Historical Park in Guam, and Kalaupapa Leprosy Historical Park in Hawaii.

While specializing in preventive conservation, Brigid also remained a hands-on conservator to the end of her career, one of her last awards being for the recovery of historic finishes in Fairsted, the home and offices of Frederick Law Olmsted, Brookline, Massachusetts.

Some of this practical work involved emergency response, as at Historic Jamestown after hurricane Isabel in 2003 and at Federal Hall in New York City immediately after 9/11, when Brigid, wearing a full respirator, cleaned ash and debris from the statue of George Washington.

Writing, teaching and mentoring others were also important aspects of her professional life. Several of Brigid’s published papers stand as bench marks, such as her Conserve-O-Gram of July 1993 on the storage of feathered headdresses and her paper on Prehistoric Human Mummified Remains in the Jubilee Conference Papers of 1986.

The periods of study at ICCROM in Rome were extremely important to Brigid, not simply for the privilege of spending time in the Eternal City. The contact with senior international experts in various conservation disciplines offered her a truly broad vision of conservation that sustained Brigid for the whole of her working life, both in her contacts with others and on a personal level. Brigid retired in 2014.

Brigid was a talented artist from an early age, and worked from 1975-1976 as a scientific illustrator at the Smithsonian Institute in Washington. No one who worked or studied alongside Brigid will forget the delightful notes and drawings she made in a seemingly effortless manner. Here is the invitation she drew in 1983 for a party in Rome for Harold Penderleith.

We offer our deepest sympathy to her husband, Lawrence ‘Larry’ Lopez.