Paolo Giorgio Ferri, Special Advisor to the Director-General of ICCROM, passed away in Rome on 14 June 2020, at the age of 72.

When I began my tenure at ICCROM as Director-General, I wanted him by my side so that he could put his precious experience, for free, to the service of protecting cultural heritage of the Member States. Indeed, many had asked us for assistance in the fight against the international traffic of artworks that were devastating their heritage, and the recovery of illicitly exported goods. In this field I did not know a better expert than Dr Ferri. In fact, in the previous twenty years, he had made an exceptional contribution to the battle against the looting of Italian archaeological heritage, perpetrated by clandestine excavators as well as Italian and international traffickers.

In his position as Assistant Public Prosecutor in Rome (1991-2010), he refined ways of integrating and giving judicial continuation to actions coordinated in the field by the Carabinieri for the Protection of Cultural Heritage, in Italian and international courts.

Graduated in law from the Sapienza University of Rome, in 1977 he became a magistrate and moved to the Public Prosecutor's Office ten years later. Beginning with an investigation in 1994 on a statue stolen from one of Rome's villas which ended up at Sotheby's in London, Ferri specialized in the world of the international art market, which previously to him had been practically unexplored. By the end of his career he had discovered at least 47 museums worldwide that contained Italian antiquities that had been acquired illicitly, implicating approximately 10,000 people. By his estimation, however, what had been discovered probably represented only 30 percent of the actual situation.

Among his great successes, we remember the 1995 raid carried out at the Geneva Free Port by the Italian and Swiss police in the warehouse of the famous Italian art dealer, Giacomo Medici. Arrested, he was later sentenced in 2004 by the Court of Cassation to eight years in prison for collecting stolen goods, and ordered to pay a fine of ten million euros as compensation to the State for damages caused to its cultural heritage.

Another famous raid was that which took place in Basil in 2001, of antiquities (and of the archive, which held precious images then used as evidence of the crimes) of another famous trafficker, Gianfranco Becchina.

A famous result at the diplomatic level of these judicial actions, has been the restitution of very important ancient works of art on the part of US museums, among which the famous Euphronios krater, displayed at the Metropolitan Museum in New York that depicts the death of Sarpedon.

After his retirement from the judiciary in 2010 he was appointed Expert adviser for international affairs to the Italian Ministry for Cultural Heritage and Activities, and I had the honour of knowing him and collaborating with him in the commission for the recovery of cultural heritage, when I worked in the same Ministry as Director of Archaeology. A consequence of his judicial action was the important exhibition I had the honour of curating with Professor L. Godart, “Nostoi. Rediscovered masterpieces” (Rome, Palazzo del Quirinale, 21 December 2007 to 30 March 2008). 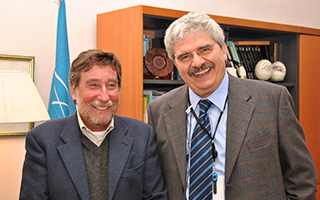 His collaboration has been invaluable to ICCROM, for the assistance provided both when advice was sought on concrete judicial recovery actions, and when collaboration was required in the reorganization of police and justice services, and finally in organizing training on these issues. Moreover he has always been extremely generous with his time and his knowledge, with us, but also with the Italian Ministry of Foreign Affairs in its bilateral relations, with UNESCO, and with other organizations – especially in light of the recent dramatic times of crisis and conflict in many countries around the world.

And finally, besides being a just man, he was very pleasant and a true friend.

Also on behalf of the current Director-General Webber Ndoro and the ICCROM Council, I extend the deepest condolences of ICCROM to his wife Marita, and to their daughter Sofia.