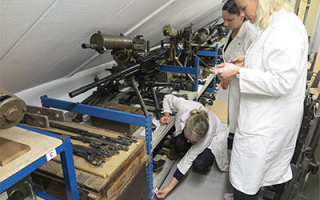 Five months after the successful RE-ORG workshop that took place in the Museum of Contemporary History of Slovenia (Muzej Novejše Zgodovine Slovenije) in Ljubljana, RE-ORG Slovenia moved to its second phase.

From 22 to 24 October 2019, a group of 11 participants coming from seven Slovene museums met again for another RE-ORG workshop to review and implement the storage reorganization proposal that was made in May 2019, based on the RE-ORG method.

Following this first workshop, most of the collections of the Museum of Contemporary History of Slovenia had been moved to a remote and centralized storage (60 km away), in order to clean the space, replace infested furniture with new open shelving units, paint the walls and install a new lighting system. 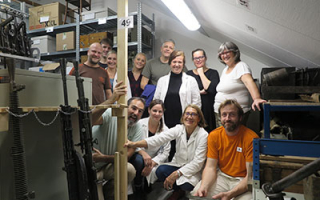 The workshop also provided the opportunity for the RE-ORG teams to catalogue and photograph all the objects, and to create a new location system, thus contributing to the enhancement of the Museum’s documentation, as well as its collections management, access and use in the future.

The workshop was led by Veljko Dzikic from the Central Institute for Conservation in Belgrade (Serbia), assisted by Jana Šubic Prislan from Goriški museum (Nova Gorica, Slovenia) and supported by the Slovene National Committee of ICOM (ICOM Slovenia).