Earthquake as Heritage – examples from Japan 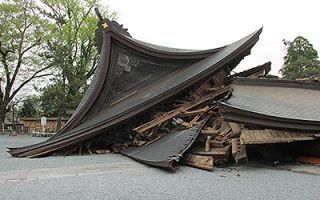 Earthquakes are disruptive events that too often have devastating consequences. They leave their marks on landscapes and buildings, influence the lives of those who experience them, and can be traumatic events for those same people. Yet what do earthquakes represent in Japan’s history and society, beyond these negative connotations? What signs have earthquakes left in the cultural heritage of Japan?

Kumamoto Castle, an important symbol for the local community, suffered some of the worst damage from the Kumamoto earthquake. The crumpling of stone bases caused the buildings positioned on them to collapse.

Historic castles are frequently damaged in Japan’s many earthquakes. For example, Maruoka castle collapsed in the 1948 Fukui earthquake. After its collapse, the castle was reconstructed using original parts as much as possible, and is therefore still standing as a cultural asset.

The extreme risk of earthquake to historic properties in Japan means that many seismic countermeasure projects are being developed for castles. These projects involve structural tests and numerical analyses, conducted to reveal structural weak points of the castle. Based on the results, seismic reinforcement can be implemented as minimally as possible, while respecting the original structure. Such is the case of Himeji castle, which is a World Heritage site.

Most Japanese castles were built in the second half of the 16th century and the first half of the 17th century, a period also known as the Age of Warring States in Japan. This period is noted for its many wars and earthquakes. Samurai generals who ordered a castle’s construction focused on its defense system and appearance, as it was to serve as a war fortress and symbol of power, and also on the castle’s seismic performance, given the many earthquakes in that period. 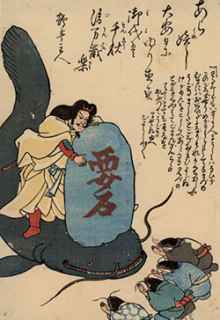 In that historical period, it was a common belief in Japan that earthquakes were caused by giant catfish living and moving under the earth. A famous samurai general of the Warring States period, Hideyoshi Toyotomi, wrote a letter in which he ordered his servants to construct his castle considering the “catfish.” This letter is the oldest evidence that Japanese people believed that catfish cause earthquakes. Notwithstanding the general’s letter, his castle collapsed from an earthquake in 1596, immediately after its construction.

Woodcut prints also depict the association between earthquakes and catfish in Japan. After the 1855 Edo earthquake, one print depicted Tokyo residents getting angry with the catfish. Another print depicts the god of earthquake prevention killing the catfish, while other catfish apologize to the god. Another satirical print depicts carpenters, who typically receive a great deal of work after earthquakes, thanking the catfish and treating him to a delicious meal.

Not only paintings, but also historic documents, traces of damage, and even the appearance of buildings transfer the memory of past earthquakes. One document made by monks shows the damage to the three-storied pagoda of Yakushi-ji Buddhist temple in Nara from the 1854 earthquake, which left the upper part of pagoda leaning. According to the document, the tilted pagoda was pulled upright and damaged parts were repaired two years after the earthquake. Nikorai-do, an Orthodox church in Tokyo originally designed and built in 1891 by a famous English architect, was severely damaged in the 1923 earthquake. After the earthquake, it was redesigned by a Japanese architect, and reconstructed considering seismic resistance. As the Japanese architect lowered the height of the tower, the church’s current appearance may be considered a result of that earthquake. 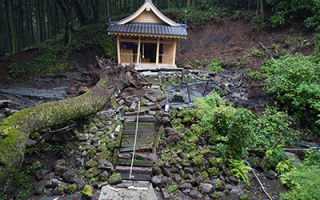 Earthquakes not only cause damage, but also can produce geological faults. The 2016 Kumamoto earthquake produced many faults. In November 2017, these faults were designated as a natural monument. Three sites were selected after long examination and discussion involving experts, local community and government. Though a detailed plan for the sites’ conservation and management is in preparation, both tangible and intangible aspects, such as legends concerning earthquake, will be preserved in order not to lose the memory of the earthquake.

There are other earthquake sites in Japan which have been designated as natural monuments. For example, a fault made by the 1891 Nobi earthquake has been preserved with a shelter. A torpedo exhibited in a museum during the 1930 Kitaizu earthquake still retains scratches on its surface. These scratches were caused by the physical force and motion of the earthquake.

Many types of cultural properties transfer earthquake memory in Japan. Torahiko Terada, a famous Japanese scientist and essayist, has written: “Disaster strikes when you least expect it.” All Japanese children know this phrase. Terada has also written, “If night came once in a century, night would be a disaster. On the other hand, if a tsunami occurred every few years, even a tsunami would not be a disaster.” This message is very meaningful for disaster risk management. According to Terada, whether earthquakes are considered a disaster or not depends on the relationship between earthquake frequency and human memory. It is impossible to make earthquakes less frequent, but it is possible to lengthen human memory using cultural and natural heritage.

The urgency for disaster preparedness relies on memory. Strengthening these memories through cultural and natural heritage, and transmitting them from one generation to the next, can be a powerful additional strategy for disaster mitigation.