Engaging with future custodians of…

Engaging with future custodians of heritage

Engaging with future custodians of heritage: Kulturnaut in your neighborhood

What is your favourite place in your neighborhood? Where do you usually hang out with your friends after school? Is it a special place only because of your friends, or is it significant for some other reasons? Do you have a cultural heritage spot that is equally important to you? How would you feel if it disappeared?

These were some of the questions that elementary school kids addressed while recording two short videos, one about their own favourite place and the other about cultural heritage.

The pilot project "Kulturnaut in your neighborhood" was intended for the pupils of four elementary schools in Belgrade. It’s intended as an entertaining cultural and educational activity. Networking, learning and thinking about cultural heritage was designed to contribute to the development of kids' creativity and the development of awareness of the importance of preserving cultural heritage. The participating pupils had the opportunity to record, display and talk about their own neighborhood, what it means to them and what cultural heritage represents for them, by using new digital technologies. 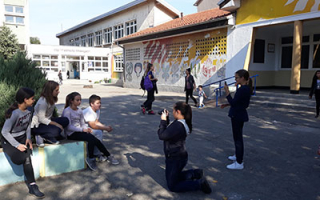 The goal was to create space for kids to learn and think more about their neighborhood and everything that surrounds them, the places where they grew up and that have special value for them, and what would happen if some buildings they loved and were accustomed to were no longer there. While reflecting on the cultural heritage in their neighborhood, the kids had the opportunity to make comparisons and highlight what distinguishes their places from other places, and what the similarities are. In this way, they realized the importance of cultural heritage and why it is important to preserve it for present and future generations.

The idea was that school kids present their famous spots, and at the same time to have fun developing their creativity and rhetoric. Through social networking they had the opportunity to get to know neighborhoods of other participating schools in the project. By assuming an active role to present their favourite places, they become actors instead of just observers, and by using new technologies they become creators and authors of their videos and stories instead of "consumers." 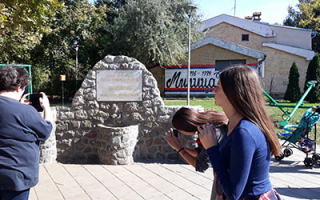 The project was attended by teachers and students from four elementary schools: "Oslobodioci Beograda," "Filip Kljajic – Fica," "Gavrilo Princip" and "Svetislav Golubovic Mitraljeta" in Belgrade, Serbia. They presented as cultural heritage a church, the Hippodrome, the Gardos tower and the cemetery of honour for the liberators of Belgrade in 1944. It was interesting to see that the cemetery of honor is also a favourite place of the "Oslobodioci Beograda" school. The favourite places of other schools included schools and park.

At the end, the project gathered kids from all four schools at the Residence of Princess Ljubica, where they had a quiz and competition about stories from their videos. They had the opportunity to learn about other parts of Belgrade and make new friendships.

This project is supported by the Ministry of Culture and Information, Serbia.