Singing from World War I to COVID-19 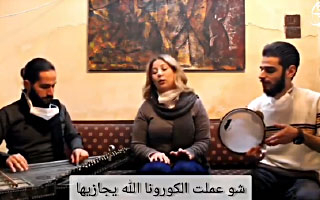 Stories have inspired songs across history worldwide. A famous one from the Middle Eastern traditional folk music tells a story from the times of the Great Famine of Mount Lebanon, during World War I.

In the middle of starvation, the Ottomans sent an Italian ship named Rosana to a port in Lebanon full of apples and grapes. They intended to sell them for cheap to compete with Lebanon’s struggling merchants. This plan as thwarted by merchants from Aleppo who arrived and bought the goods to help the Lebanese, as a gesture of solidarity against the Ottomans. The song, titled Rosana after the ship, curses it and thanks the Aleppo merchants.

Today, musicians from Aleppo have modified the lyrics of this popular song to adapt them to the COVID-19 crisis that is expanding worldwide. With the traditional sounds of the ruque or riq and qanun, typical instruments used in Syrian folk music, the song adapts the messages from the old story to the current situation.

Oh Corona, oh Corona, all the disasters are because of it
What has the Corona done? May God punish it!

It locked us in our houses, and stopped all our business
There is no money in our pockets, all the money has gone!

Everyone has his mask on, alcohol pack, and hand sanitizer
Do not shake hands or kiss. For God sake, just rest!

As for you who are going to the quarantine, my heart goes out for you
A small period that will quickly pass, and we will relax all together

Crisis dealers all agreed against people and raised prices,
and the people are crowded buying goods like it is the last day on earth

The National - Ottoman hunger games and the 1915 Great Famine