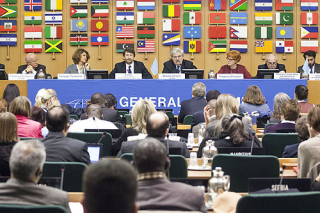 Rome, Italy – The 30th General Assembly of the International Centre for the Study of the Preservation and Restoration of Cultural Property (ICCROM), held from 29 November – 1 December in Rome, will provide a platform to stimulate dialogue on sustainable approaches to the reconstruction of destroyed and damaged historic cities. Delegations of ICCROM’s 135 Member States will meet at this three-day event to discuss and endorse the Rome-based agency’s strategic directions and work plan, and elect its governing Council. The General Assembly will also ratify the nomination of its next Director-General, nominated by the executive Council for a six-year period of leadership.

ICCROM’s current Director-General, Stefano De Caro, thanked the Member States for their participation and continuing support of ICCROM’s programmes to build capacities within the professional community for safeguarding irreplaceable heritage.  He highlighted ICCROM’s willingness to put its expertise at the service of post-war heritage recovery and reconstruction in crisis zones around the world, leveraging heritage for the benefit of communities, particularly in Libya, Syria and Yemen, once conditions on the ground become safe enough to do so.

A Thematic Discussion on “Post-Conflict Reconstruction– Recovery and Community Involvement” will be held as part of the 30th General Assembly. The event will feature a keynote address by Mahmoud Mohieldin, Senior Vice President of the World Bank Group for the 2030 Development Agenda, and will underline the need for coordination between different development agencies on reconstruction issues, while engaging and supporting communities in respect for cultural diversity. The discussion will focus on examples and case studies from countries around the world, including Bosnia and Herzegovina, Japan, Lebanon, Mali, Mexico, Sri Lanka and Syria.

In conjunction, the Incontro di Civiltà Association headed by Francesco Rutelli, former Italian Minister of Culture, will sponsor an exhibit entitled “Palmyra: Rising from Destruction,” featuring two examples of heritage originating from Palmyra, Syria. The first, a replica of the Temple of Bel, has been brought back to life through state-of-the-art technology. The second, a funeral bust looted from Palmyra, was recovered in Italy by the Carabinieri Command for the Protection of Cultural Heritage, and will be sent back to Syria when conditions permit.  The Incontro di Civiltà Association is also currently sponsoring an exhibit of its reconstructed winged Bull of Nimrud at UNESCO Headquarters in Paris, France, through November 2017.

A related photography exhibition at the Egyptian Academy in Rome entitled “The Day After: Shadows of Heritage” will depict devastated cultural heritage in five countries of the Middle East, pairing before and after photographs to witness the scale of that destruction.

This General Assembly marks sixty years of ICCROM’s activity.  ICCROM was founded at the Ninth Session of the UNESCO General Conference in New Delhi, 1956, to study experiences of heritage restoration and reconstruction in different countries after the destructions of the Second World War. An agreement signed in 1957 between the Government of the Italian Republic and UNESCO established the Centre in Rome.  In 2014, ICCROM opened its first Regional Office, the ICCROM-ATHAR Regional Conservation Centre in Sharjah, United Arab Emirates.

The ICCROM Award ceremony will also be held during the 30th General Assembly. This award is granted to individuals who have contributed significantly to ICCROM’s development, or who have special merit in the field of conservation, protection and restoration of cultural heritage.

The deadline to request press accreditation is 23 November 2017.

The event will be held at FAO Headquarters in Rome.  Admission is limited to pre-accreditation only.