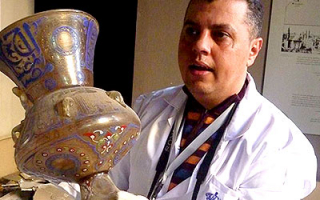 A fire, an evacuation, a crash – on 22 August, international participants in the course ‘First Aid to Cultural Heritage in Times of Crisis’ (FAC) will be rushed to the scene of a large-scale, simulated disaster; it will be a rigorous test of their skills in rescuing irreplaceable cultural heritage.

The scenario: The invaluable collection of an ethnographic museum is in danger of being lost forever. A culture ministry official arrives on the scene, but any rescue action has to be negotiated with firefighters who control access to the area.  Another explosion interrupts their work. How will these newly trained cultural heritage “first-aiders” respond?

Since 6 August, 24 First Aid to Cultural Heritage in Times of Crisis trainees have been immersed in a 3-week course on heritage rescue in the province of Brabant. In their final exercise, they will have to quickly assess the situation, draw on their own expertise, delegate tasks to teams and put their new skills to the test. Organized by ICCROM with the Prince Claus Fund, the Smithsonian Cultural Heritage Initiative, and the Netherlands Commission for UNESCO, the course includes modules on prevention, safe evacuation, stabilization and protection of cultural heritage at risk. Trainees have also learned about assessing damage and risk, setting priorities and negotiating with authorities on the scene.

In preparation for the final simulation exercise, the participants learned theory in the classroom and applied it in practical exercises. These smaller simulations have taken place at Landgoed de Klokkenberg in Breda, which took on the role of a flooded museum. Course participants had to quickly make risk and damage assessments, safely enter the building and prepare an action plan to rescue the building and its art objects.

The final disaster simulation exercise falls within the activities of the 2018 European Year for Cultural Heritage, which supports actions to protect heritage at risk and engage public awareness around heritage, while also highlighting European cultural cooperation.

Participants in the Brabant FAC course have arrived from 23 countries worldwide (listed below) and come from a variety of professional backgrounds: some are conservators, archaeologists, researchers or archivists, still others are involved in humanitarian assistance as aid coordinators and military officials.

2018 is the European Year for Cultural Heritage. It’s also a year that has seen floods, fires, earthquakes and destructive armed conflict in different parts of the world that have put cultural heritage at risk.

Concerned individuals do what they can, but effective heritage protection and rescue requires trained people on the ground who know what to do when disaster strikes.

The First Aid to Cultural Heritage in Times of Crisis (FAC) training course was first held in Rome in 2010, organized by ICCROM with the Italian culture ministry MIBACT, UNESCO, and Blue Shield. The Smithsonian Institution has teamed with ICCROM since 2010, at first for post-seismic safeguard of Haiti’s heritage, while the Prince Claus Fund became a FAC funding partner in 2011. From 2015, The Prince Claus Fund and the Smithsonian Cultural Rescue Initiative have collaborated with ICCROM on training courses in Amsterdam, Washington DC and elsewhere.

FAC trainees are urged to pass on their knowledge by organizing local courses. So far more than 100 ‘cultural first aiders’ have been trained and officially certified in Egypt, Georgia, Iraq and Serbia. They form the core of a growing international network of professionals who are equipped to respond when a natural or manmade disaster threatens to destroy irreplaceable cultural heritage.

The closing ceremony for the FAC course in Brabant will take place Saturday, 25 August at 13:00 at the Stadhuis, Markt 1,‘s-Hertogenbosch. Minister Ingrid van Engelshoven of Education, Culture and Science (OC&W) will attend.

The FAC course will be followed by a one week leadership module from 27 – 31 August for a select group of past FAC trainees. This additional course is designed to foster the creation of sustainable national or regional networks and strengthen capacity for further integrating heritage rescue operations with humanitarian relief during disaster situations.

Press accreditation: The simulation exercise will take place at 13.00-17.00 on 22 August on the grounds of the Koninklijke Militaire School Luchtmacht, Vliegbasis Woensdrecht (KMSL Vlb WDT).

If you would like to be present to report on the simulation exercise, please send your accreditation request to Martine Willekens M.Willekens@princeclausfund.nl and include ‘22 August FAC simulation’ in the subject. For security purposes, your family name, first initials, name of media organization, function, birthdate and birth place are required.

The deadline for accreditation (audio/visual/multimedia/written press) is Monday 20 August at 12.00 noon. Please note, there is limited space available.

Advance press registration for the closing ceremony on 25 August is required by 23 August.  Please contact M.Willekens@princeclausfund.nl to attend.

During the course, aspects of cultural heritage and its protection will be highlighted in various public    events organized by the Netherlands Commission for Unesco. These include:

24 August:  Film screening of the prizewinning documentary The Destruction of Memory, at the Chassé Theatre in Breda, followed by a discussion. Marielies Schelhaas Secretary General of the Netherlands Commission for Unesco, will lead a panel of experts in the protection of cultural heritage that includes Major Edwin Maes, Deputy Head of the Cultural Affairs Section of the Netherlands Ministry of Defense, and Corinne Wagener, Director of the Smithsonian Cultural Rescue Initiative

25 August:  Rebuild St. John’s Cathedral with Minecraft Make a virtual reconstruction of ‘s Hertogenbosch’s iconic cathedral and join a discussion of the importance of cultural heritage with the gaming historians and archeologists of the VALUE Foundation, at the Public Library (Bieb) of ‘s Hertogenbosch.

25 August:  Immerse yourself in medieval fun at the ArcheoHotspot in the Groot Tuighuis, ‘s Hertogenbosch. Guides are there to help you play with toys and games from the Middle Ages along with newer games developed by the Heritage Department of ‘s Hertogenbosch. Dress up in medieval clothes and explore the city (digitally) as it was in the Middle Ages. Fun for kids and folks of all ages.

28 August: Documentary Heritage in small institutions, discussion and workshop at De Nieuwe Veste in Breda. The destruction of documentary heritage is a particular concern of archives large and small around the world. Vincent Wintermans, Senior Policy Officer at the Netherlands Commission for Unesco will discuss UNESCO’s Memory of the World programme. Frank Bergevoet of the Netherlands Cultural Heritage Agency (RCE) will place the discussion in the context of Dutch cultural heritage, followed by a workshop on the preventive conservation of archives. Organised in collaboration with the Breda Municipal Archives.

The 2018 FAC training has been organized by ICCROM, the Prince Claus Fund, the Smithsonian Cultural Heritage Initiative, and the Netherlands Commission for UNESCO Pas well as local partners: the Province of North Brabant, Brabant Heritage, and the municipalities of Breda and ’s Hertogenbosch, with support from Brabant C, Mondriaan Foundation and the Netherlands Ministry of Education, Culture and Science (OC&W).

The Prince Claus Fund supports, connects and celebrates artists and cultural practitioners where cultural expression is under pressure, primarily in Latin America, Africa, Asia, the Caribbean and Eastern Europe. Through its Cultural Emergency Response programme, the Prince Claus Fund provides quick help to evacuate, stabilise or rescue cultural heritage that is under threat due to conflict situations or natural disasters.  https://princeclausfund.org