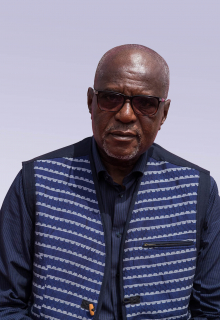 ICCROM is deeply saddened by the recent death of a well-known professional, long-time collaborator and member of the ICCROM Council, Mr Abdoul Aziz Guissé.

He had a long career as a teacher and educational consultant, training generations of students in his native Senegal as a professor of history and geography in Ziguinchor, Casamance. His experience was also sought regionally and internationally. He frequently worked with the Ecole du Patrimoine Africain in Benin, the African World Heritage Fund in South Africa, UNESCO, and ICCROM.

With ICCROM, he collaborated on several courses and seminars held through the AFRICA 2009 Programme.

His contribution to the management and conservation of cultural heritage in Senegal and elsewhere stemmed from his desire to raise the profile of cultural heritage. He was a member of a team of experts charged with preparing the World Heritage nomination dossiers for the Stone Circles of Senegambia (2005), the Saloum Delta (2011) and the Bassari, Fula and Bedik Cultural Landscapes (2013).

He also participated in piloting the inscription of Kankurang (2006 - 2008), Xooy (2013) and most recently the culinary art of Ceebu Jën (2021) on the Representative List of the Intangible Cultural Heritage of Humanity. Between 2013 and 2015, he coordinated an inventory project of traditional music, and was supervisor of the inventory project of Intangible Cultural Heritage in Senegal (2016 to 2019), which was published in June 2021.

In addition to his work with UNESCO through several of its Conventions, he was also involved with ICOMOS as a member of the experts panel for World Heritage.

From 2003 to 2015, he was Head of the Division of Historic Sites and Monuments and Director of the project to construct the Musée des Civilisations noires, and then Director of Cultural Heritage within the Ministry from 2015 to present.

In October 2021, Guissé was elected to the ICCROM Council. With several projects in store, including expanding the Youth.Heritage.Africa programme, his absence will be felt, and he will be sorely missed.

The Director-General and the entire ICCROM family extend their sincerest condolences to his friends, family and colleagues.