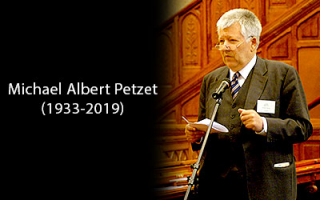 “ICCROM expresses its condolences and great sadness at the passing away of Michael Petzet,” said ICCROM’s Director-General, Dr Webber Ndoro. “This is a sad moment for all heritage conservation professionals, given his outstanding contribution in this field.”

Dr Petzet, in the words of Jukka Jokilehto, past Deputy Director of ICCROM, “was one of the protagonists in the second half of the 20th century, when the modern conservation principles and practices were formulated at the international level. He strongly defended the concept of Denkmalpflege, the conservation and maintenance of monuments. Indeed, he was very much in the Germanic tradition following in Alois Riegl's footsteps.”

A world-renowned conservation scholar with multiple publishing and editing credits to his name, Petzet participated in many pivotal ICOMOS publications including the periodic Heritage at Risk reports, International Principles of Preservation (2009), and multiple titles from the ICOMOS Monuments and Sites series.  In fact, the Monuments and Sites series was a contribution of ICOMOS Germany, prepared and printed in Munich on Petzet’s initiative.

Jokilehto further remembered, “It is characteristic of Petzet's philosophy that the first issue of this periodical introduced a large number of translations of the Venice Charter, and the introduction was an important contribution by Petzet, illustrating his views on the interpretation and implementation of the policies expressed in the Charter. Petzet also strongly sponsored the analysis of the criteria for nomination to the World Heritage List, including two important volumes in the ICOMOS series, one on the List, and the other on OUV [Outstanding Universal Value].”

In 1994, Petzet was one of the principal keynote speakers in the Nara conference on authenticity, which introduced the Nara Document on Authenticity. This conference was important in contributing to the better understanding and recognition of all world's cultures. These ideas have since been introduced in the policy documents adopted by UNESCO and ICOMOS.

An art historian who studied in both Munich and Paris, Petzet was considered a particular expert on conservation and restoration theory and on French and Bavarian monumental architecture of the 17th and 18th centuries. Petzet penned many art-historical works relating to these cultures; his doctoral thesis on the church of Sainte-Geneviève in Paris was published in 1961 as Soufflots Sainte-Geneviève und der französische Kirchenbau des 18 Jahrhunderts (Soufflot’s Sainte-Geneviève and French church construction of the 18th century).

Petzet worked for several decades as an administrator of Bavarian cultural heritage. Starting in 1958, he served in various roles at the Bavarian State Office for Monument Protection, the Direction for State Castles, Gardens and Lakes, the Munich Central Institute of Art History, and the Lenbachhaus State Gallery, where he was named Director in 1972.  These appointments were succeeded by Petzet’s more than two decades of service as President of ICOMOS Germany and ICOMOS International.

Petzet was Honorary Professor at Bamberg University, and also taught at the Munich Academy of Fine Arts and the Technical University of Munich.  In addition to his teaching and administration duties, Petzet was also actively involved in many international restoration initiatives, especially in Afghanistan with the Bamiyan Buddhas and in China.

Petzet attended several ICCROM General Assemblies as delegate from Germany, and as President of ICOMOS also participated as an ex-officio member of ICCROM’s Council.

Gustavo Araoz, ICOMOS President, honoured his predecessor in the role by recalling Petzet’s “unerring commitment to excellence in the conservation of the world's cultural heritage.”