Under the patronage of H.H Sheikh Dr Sultan Bin Muhammad Al Qasimi, Member of the Supreme Council and the Ruler of Sharjah, the primary virtual meetings of the 2nd edition of the Arab Forum for Cultural Heritage concluded on 10 November. The Forum was organized online by ICCROM-Sharjah from 9-10 November 2020, under the title “Authenticity, Community and Conservation in the Arab Thought”.

Several experts – academics, researchers, students, intellectuals, historians, architects, archaeologists, conservators, and other culture and heritage professionals working in the Arab World and beyond – participated in the event.

The panelists participated in lively discussions related to developing visions and future steps to enhance the concept of “authenticity”, calling also for the promotion of the significance and meanings of cultural heritage by all means and methods.

Discussions also stressed the importance of integrating heritage into sustainable urban development; adopting the concept of cultural diplomacy as a means of building peace and promoting communication and dialogue between peoples and cultures; exploring means to engage diverse communities in conservation and post-disaster recovery projects; and finally, analyzing the role of museums and education in making cultural heritage more understandable and relevant to the public.

Webber Ndoro, Director-General of ICCROM, emphasized the importance of this Forum for the topics and significant case studies presented, and for the exemplary work of the winners and runners up of the ICCROM-Sharjah Award. “The six shortlisted projects that we have seen today are evidence of the existing capacities in the Arab region, and they represent exemplary practices in the region”, he said. “Apart from showcasing significant cultural assets, the Award celebrates cultural diversity of a high quality,” he concluded.

Manal Ataya, Director-General of the Sharjah Museums Authority and Chairperson of the Jury Committee of ICCROM-Sharjah Award, expressed her sincere thanks and appreciation to His Highness Sheikh Dr Sultan Al Qasimi, Member of the Supreme Council, Ruler of Sharjah, for his continuous efforts to protect and preserve cultural heritage. “Being among many initiatives steered by His Highness into the preserving of cultural heritage, this only-of-its-kind in the region prize, organized by ICCROM-Sharjah, illustrates the commitment to honour and recognize the valuable efforts of those who preserve heritage and culture in the Arab world,” said Ataya.

ICCROM's Council Chairperson, Oliver Martin, highlighted the importance of communication as a conservation strategy. “The images we have seen today show us the incredible achievement in the world of conservation in the region”, he said. “Through the Award, we don’t only distinguish the excellence of the work, people and the project leaders who are responsible for these projects; but also we want to share the values of these projects, and communicate the best practice in the region and beyond,” he added.

Zaki Aslan, Director of ICCROM-Sharjah, expressed his gratitude, saying: “His Highness the Ruler of Sharjah's patronage of the ICCROM-Sharjah Award for Good Practices in Cultural Heritage Conservation in the Arab Region, and the Arab Cultural Heritage Award for the Young, would promote preservation work at sites and museums according to international standards and would raise awareness on this issue for future heritage champions”.

“These two issues are at the core of ICCROM's mission to serve member states from its office in Sharjah, the United Arab Emirates, which covers the Arab region,” he said. “It was clear from observing the winning and shortlisted projects that all of these important projects, whether they rescue endangered heritage – such as cities destroyed by war, manuscripts and collections, or serve the people and residents – have a great impact on preserving the identity and history of the region," he added.

"We thank everyone who participated in, and supported, these significant projects, as this illustrates the qualitative leap in applying scientific standards and methods promoted by ICCROM. We are planning to publish these projects at the beginning of next year to spread the benefits widely," Aslan concluded.

The Arab Forum concluded by announcing the winners of the ICCROM-Sharjah Award for Good Practices in Cultural Heritage Conservation and Management in the Arab Region (2019-2020), and the Arab Cultural Heritage Award for the Young. The “Rehabilitation of Souk al-Saqatiya” in Aleppo, Syria, a project funded and implemented by the Aga Khan Development Network, has won the Grand Award for the category of Heritage Sites and Buildings. 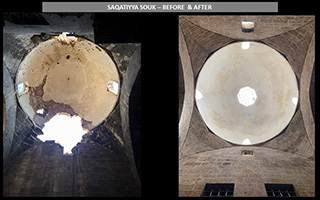 According to the final report of the Jury, this project was selected for “adopting a participatory approach that led to a model achievement that restored hope for a historic centre ruined by a disastrous war”. The project succeeded in rehabilitating a popular marketplace by drawing upon a high-quality sustainable restoration work within the Reconstruction Project, while training the local cadres and contractors.

The winner of the Grand Award for the second category of Collections in Cultural Institutions is the project, “Digitizing and First Aid to Documentary Heritage of the ‘Manuscripts Collection of the Great Omari Mosque Library’” from Gaza, Palestine. The Jury valued the efforts of this essential project which works to preserve Palestinian identity and its intangible heritage through modern scientific means of maintaining the Great Omari Mosque Library. The Committee also appreciated the hard work of the project under the difficult humanitarian conditions in the Gaza Strip. 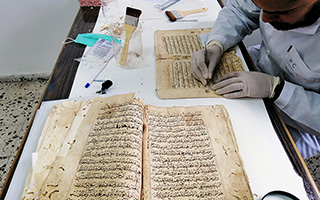 As for the Arab Cultural Heritage Award for the Young, the winners are: Reem Saif Saeed Muhammad Al Shehhi from United Arab Emirates, for the Drawing category; Ibrahim Ibrahim from Lebanon for the photography category; Al-Daheha Dance of Qasr Al-Hallabat School in Jordan for the folkloric dance category; Dania Al-Amrat from Jordan, for the promotional film category. Other projects from the United Arab Emirates, Lebanon and Libya have received certificates of appreciation. The Arab Cultural Heritage Award for the Young is a new competition that aims to raise awareness among the young generations of the tangible and intangible heritage in the Arab region, and to spread the concept of preserving heritage through art. 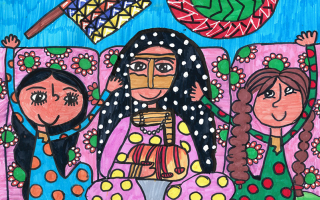 At the end of the Forum, prizes and certificates of appreciation were presented online to the winners. Ali Esmail, Director of the Aga Khan Cultural Services in Syria, and Munir Al-Baz of the University College of Applied Sciences in Palestine, expressed their happiness at winning the award, stressing its importance for highlighting individual and institutional initiatives that seek to preserve and honour the cultural heritage in the Arab region. Esmail concluded by saying, "this award gave us hope and made us feel that there is light at the end of this long tunnel".