Capacity building, the key to better…

ICCROM at the 42nd session of the World Heritage Committee in Manama, Bahrain, 21-30 June 2018 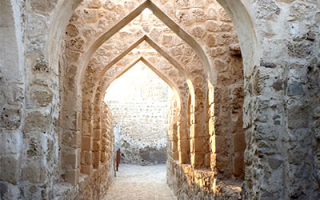 The 42nd session of the World Heritage Committee meeting held in June put a strong emphasis on the importance of capacity building. Numerous committee decisions requested and recommended capacity building for conservation of sites, with the Site Managers Forum adding a firm voice to the importance and vital need for better guidance and assistance.

The 2nd edition of the Site Managers Forum (SMF) began on 21 June, three days before the Committee session’s official opening.  A total of 44 site managers from 33 States Parties attended the eight-day Forum, given under the theme of “Roles, Responsibilities and Capacity-Building Needs.” After five days of lectures, group work, discussions, and networking, the SMF participants also attended the plenary session of the World Heritage Committee for three days.  They observed how the Committee operated to take decisions on the State of Conservation of World Heritage sites.

ICCROM co-organized the Forum together with the Kingdom of Bahrain, through the World Heritage Leadership Programme, in cooperation with the UNESCO World Heritage Centre, ICOMOS, IUCN, and the National Heritage Board of Poland.

The Forum produced the Statement of Participants: Recognition and Inclusion, presented during the plenary session of the Committee. As professionals working directly on the sites, site managers noted the similarity of their role as coordinators of management systems and the daily challenges and responsibilities they faced, regardless of the type and size of the heritage. Their Forum statement highlighted the importance of recognizing the site management “team,” together with their collective roles and responsibilities, as an important step in understanding the complexity of heritage management. The statement also emphasized the importance of involving and including site managers and coordinators into the decision making procedures of the World Heritage Convention, as it is the site managers and coordinators who are ultimately responsible for putting in place the actions requested by the Committee. (The Arabic translation of the SMF Statement of Participants has been provided by our Forum participant, Mr. Muhammad Al-Absi, Jordan.)

During the Committee session, after ICCROM’s report on capacity building, the vast majority of Committee members intervened to stress the importance of these endeavors, commending the role ICCROM was undertaking. Maintaining the sustainability of training, involving all stakeholders, keeping the focus on conservation and protection, and implementing an effective communication strategy for acquiring more funding were highlighted for continuous attention in order to ensure progress. Speakers underlined the positive effect that a strong relationship between States Parties, institutions, and individuals engaged in these diverse activities could have on alleviating greater problems.

The World Heritage Leadership (WHL) Programme organized a side event on 25 June, which attracted over 100 participants. The WHL programme’s evolution was presented since inception, with the objective of establishing a Heritage Management Resources Platform.  Partner institutions and activities were also promoted. The Norwegian delegation emphasized how the exchange of knowledge and practice between the State Party and the Advisory Bodies were mutually beneficial, to encourage the support of more States Parties for the programme. 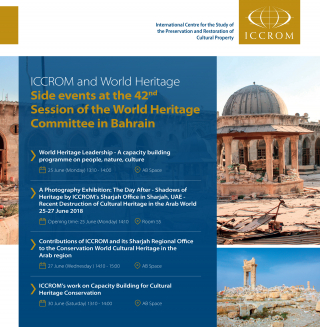 ICCROM is nearly always acknowledged as an Advisory Body to the Committee, yet ICCROM’s programmes outside World Heritage had rarely been promoted at the World Heritage Committee before. This year, ICCROM took the opportunity of convening a side event on 30 June to introduce ICCROM as it fully functions, presenting the diverse programmes that span movable heritage, collections, sounds and images, disaster risk management, intangible heritage, research on cultural heritage topics, library, archives and communications. This event met with much interest, and saw the rapid distribution of about 150 copies of ICCROM publications provided for the participants.

As the Committee’s plenary session focuses on decision making for various issues in World Heritage, much of the content discussion and debates take place in numerous side events hosted by different institutions and entities. ICCROM managed and organized the daily side events in the Advisory Bodies Space, hosted by the three Advisory Bodies (ICCROM, ICOMOS, IUCN) during the entire session of the Committee. The depth and diversity of the issues covered in these side events are crucial in understanding the solid programmes and methods that support the World Heritage system.

ICCROM’s work as a WHC Advisory Body allows it to serve Member States directly, to monitor conservation issues around the world, and to work with leading conservation institutions working in the World Heritage system.  This also provides a chance to expand ICCROM’s scope of work, and respond to emerging themes and needs.