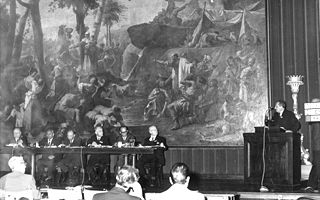 Sixty years ago the world was a very different place. The Second World War and events leading up to it left vast parts of the world in ruin, and destroyed monuments, works of art, and historic towns and villages became raw reminders of the connection between culture and community identity and well-being. In the wake of this context, when economies were rebuilding, the idea of the universal value of cultural heritage began to gain recognition and momentum at an international level, as countries came together to find ways to salvage their heritage.

UNESCO and its Member States advocated and agreed that there was a need to establish an International Centre that could study and promote solutions to preserving and restoring cultural property. This video presents this process: the first years of ICCROM’s creation are recounted by current ICCROM staff and illustrated by archival material.

The story spans from 1950, when the initial steps to implement mechanisms for the maintenance of cultural heritage of universal interest were undertaken, through 1956, when UNESCO decided to create ICCROM, up to 1960, when the first ICCROM General Assembly took place and Member States began discussing universally valid principles for safeguarding heritage, recognizing at the same time the specificity and particular identity of heritage in its cultural-historical context.

This video is filmed in English and French, with subtitles in five languages (Arabic, English, French, Italian, Spanish) available.