Conversaciones... a multilingual journal on history and theory 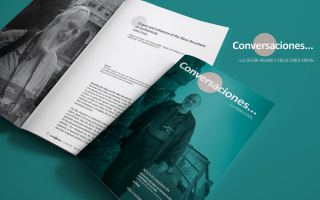 Conversaciones... is an international peer-reviewed journal published twice a year, which promotes reflection and discussion on the history and theories of cultural heritage conservation. Though initially geared to a Spanish-speaking audience, the central texts and author contributions cover a broad variety of languages and regional representation.

Each volume focuses on one or two notable figures in conservation, and one of their central texts which has either never been published in Spanish, or whose circulation has been limited. The original version is provided along with a Spanish-language translation. Several guest authors are then invited to contribute articles that analyze and discuss either the central texts or the original authors. The contributions of these guest authors are published in their original language, accompanied by translations into Spanish and English as necessary.

Conceived by the Instituto Nacional de Antropología e Historia (INAH), through the Coordinación Nacional de Conservación del Patrimonio Cultural (CNCPC) of Mexico, as of Number 7 it is now a co-publication with ICCROM.

This new collaboration is one of the many results to come out of a longstanding partnership between ICCROM and INAH-CNCPC. It is our shared hope that by offering up these fundamental texts, together with some contemporary thinking around them, we will be able to enrich further the conversation between heritage professionals around the world while providing greater access to literature that has shaped our field. 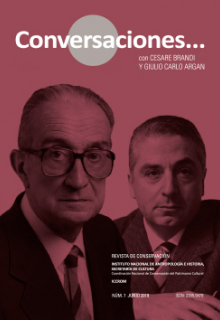 This edition is dedicated to two of art history and conservation’s “greats”: Cesare Brandi (1906-1988) and Giulio Carlo Argan (1909-1992). They were responsible, among other things, for establishing the prestigious Istituto Centrale del Restauro (ICR – now known as the Istituto Superiore per la Conservazione ed il Restauro), which in turn was instrumental in the development of ICCROM in its early years.

Brandi and Argan shifted a paradigm through their thinking and self-questioning, and their testimony has since been handed down to future generations of conservation professionals through several published works. This volume contains a comprehensive bibliography, which in itself is an ample testimony of their influence in the field.

This volume pays them tribute through a reading of their works, which sheds light on their intellectual journey, maturation and sometimes changes in opinions. It acknowledges the complex and rich connections between criticism, aesthetics, theory and restoration that they bequeathed to us. 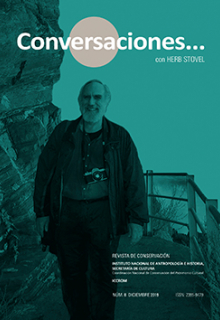 Number 8 is dedicated to a dear former colleague at ICCROM, Herb Stovel (1948-2012), another giant in the field of conservation. In particular, this volume focuses on an article he authored, “Origins and influence of the Nara document on authenticity”, translated and reproduced with kind permission from the APT Bulletin.

The Nara document, in addition to clarifying the concept of authenticity, has been a key element in promoting the concept of cultural diversity in conservation. To accompany this text, five guest authors were invited to explore the central ideas presented and discussed by Stovel. Several of them were present at the Nara Conference on authenticity in 1994, which makes their testimony to the importance of the ideas promoted there all the more relevant.

The volume also contains a transcription of the Nara document on authenticity in its English version (drafted by Herb Stovel and containing his comments) and the French version (drafted by Raymond Lemaire), as well as a revised translation into Spanish, which takes into consideration the variations between both original versions. We also considered it would be important to include the Riga Charter on authenticity and historical reconstruction in relation to cultural heritage, also developed by Herb Stovel, and which he mentions in his article. It is accompanied by a translation into Spanish.

Stovel’s professional legacy will be carried on by the hundreds of students and colleagues who have benefited from his knowledge and enthusiasm for heritage conservation. His contribution to the development of conservation concepts will also be long remembered, in particular related to the ideas surrounding the concepts of authenticity, integrity, disaster risk preparedness, living heritage, and cultural landscapes. His bibliography is presented at the end of this volume.