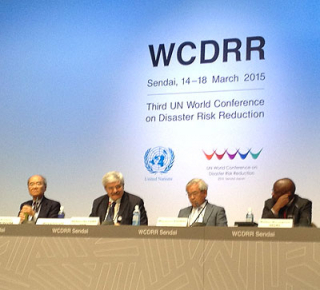 Over 50 participants attended the meeting, coming from all regions of the world.

In 2005 ICCROM, UNESCO and ACA held a thematic session entitled Cultural Heritage Risk Management at the 2nd World Conference on Disaster Risk Reduction, in cooperation with the Ristumeikan University (Japan) and other partners. This would be the first time cultural heritage was discussed within the larger field of disaster risk reduction policy and programmes.

Since that time, much has changed. A World Heritage Strategy on Disaster Risk has been developed, and a number of courses implemented to train professionals. However, despite these developments, cultural heritage is increasingly affected by both natural and human-caused threats.

At the same time, cultural heritage (including tangible and intangible, movable and immovable) is increasingly recognized as a driver of resilience that can support efforts to reduce disaster risks broadly. In the same way that biological diversity increases the resilience of natural systems, cultural diversity has the capacity to increase the resilience of social systems, since it is the result of centuries of slow adaptation to the hazards that affect local environments.

The maintenance of cultural diversity into the future, and the knowledge, innovations and outlooks it contains increase the capacity of human systems to adapt to and cope with change.

The level of preparedness for all types of cultural heritage with regards to disaster risks is still very low in all regions of the world, yet cultural heritage could potentially constitute a major resource on which to establish sustainable social development, economic growth and community resilience.

To understand the gaps, ICCROM and other partners held an International Expert Meeting on Cultural Heritage and Disaster Resilient Communities.

This year’s International Experts Meeting was held within the framework of the 3rd WCDRR and was composed of the following events:

As the focus was on information exchange and awareness-raising for cultural heritage disaster risk reduction, partner organizations submitted a series of exhibition panels to facilitate networking and inspire new partnerships.

Prior to the 3rd WCDRR, the meeting participants assembled in Tokyo to consider the role of cultural heritage and cultural practices of communities for ensuring disaster resilient communities. This took into consideration the review of the Hyogo Framework for Action and the expected outcomes and goals of the Sendai Framework for Disaster Risk Reduction 2015-2030 (SFDRR 2015-2030).

Using the Priority Areas identified in the SFDRR 2015-2030, the meeting participants made the recommendations.

This session aimed at increasing recognition about the relationship between resilient cultural heritage and resilient communities, as a means to implement a post-2015 framework for disaster risk reduction.