On 18 September 2022, Japan was hit by super typhoon Nanmadol – one of the country’s biggest storms in years. Japan’s typhoon season spans from May to October, with the most severe storms arriving in August and September. Nanmadol has had a ripple effect on the country, causing flooding and mudslides.

Because of its climate and topography, Japan has been particularly vulnerable to extreme hazard events such as typhoons, earthquakes and tsunamis. In 2011, the overlapping earthquake, tsunami and nuclear accident led to the loss of lives and livelihoods, destruction of homes and infrastructure, and significant damage to heritage.

Concerned with one of the most vulnerable groups of survivors in the aftermath of this triple disaster, Prof. Machiko Kamiyama came together with a group of like-minded clinical psychologists to provide psychosocial support to children and school teachers in the Miyagi prefecture, which suffered the most losses.

Machiko’s group collaborated with the Miyagi Prefectural Board of Education to provide workshops for teachers, helping them to overcome post-traumatic stress disorder (PTSD), and use integrated psychosocial care embedded into the everyday running of the schools to promote the children’s mental and physical well-being.

In order to reach the Miyagi Prefecture’s foreign residents, the group enlisted the help of Machiko’s husband, Prof. John Morris, a historian and a retired professor from Tohoku University, Sendai.

John was also contributing to the work of restoring and salvaging documentary heritage held in temples and private family archives through Miyagi Shiryō Net (MSN). MSN is a network established in 2003 in response to Japan’s recurring earthquakes and subsequent loss of Miyagi’s historical heritage. The network engages the local community and citizen volunteers, especially elders, in the process of cultural recovery. Eleven years on from the triple disaster, MSN has continued to salvage and preserve local cultural heritage across typhoons, earthquakes and a pandemic, helping survivors rebuild their lives and communities.

As part of her work with the school board, Machiko interacted with grieving families. As a result of this interaction, she realized that MSN’s work is a textbook case of providing psychosocial support post-disaster. Encouraged by John, who was already thinking of reframing the work of salvaging family documents to provide psychosocial support, Machiko started conducting an objective assessment and psychometric analysis on the value of salvaging, restoring, preserving and returning heritage to its owners. As part of this study, she interviewed the private owners affected by tsunamis and earthquakes to assess the direct and indirect impacts of them receiving a restored piece of their family’s heritage.

She began this study in 2015 and is now interviewing the citizen volunteers who are engaged in cleaning and restoring at-risk heritage collections, with the goal of formulating a theoretical framework that explains the psychosocial benefits of participatory heritage preservation, going beyond the boundaries of conventional psychology.

Machiko and John’s work clearly illustrates the immutable linkages between heritage, memory, sense of place and personal inner sense of ‘wholeness’ and ‘belonging.’ In order to spread this idea further, John and Machiko approached Aparna Tandon, Senior Programme Leader of the First Aid and Resilience for Cultural Heritage in Times of Crisis Programme, ICCROM, and - together with Prof. Imamura Fumihiko, Director of the International Research Institute of Disaster Science (IRIDeS), Tohoku University and Prof. Sato Daisuke, Associate Professor at IRIDeS  - meticulously translated First Aid to Cultural Heritage in Times of Crisis – Handbook and Toolkit into Japanese.

Their inspiring work is helping organizations and individuals reinforce the idea that culture cannot wait. In the immediate aftermath of a disaster, culture is and should be an integral part of humanitarian assistance and psychosocial support.

Providing a resource to those in Japan: First Aid to Cultural Heritage in Times of Crisis Handbook translated into Japanese 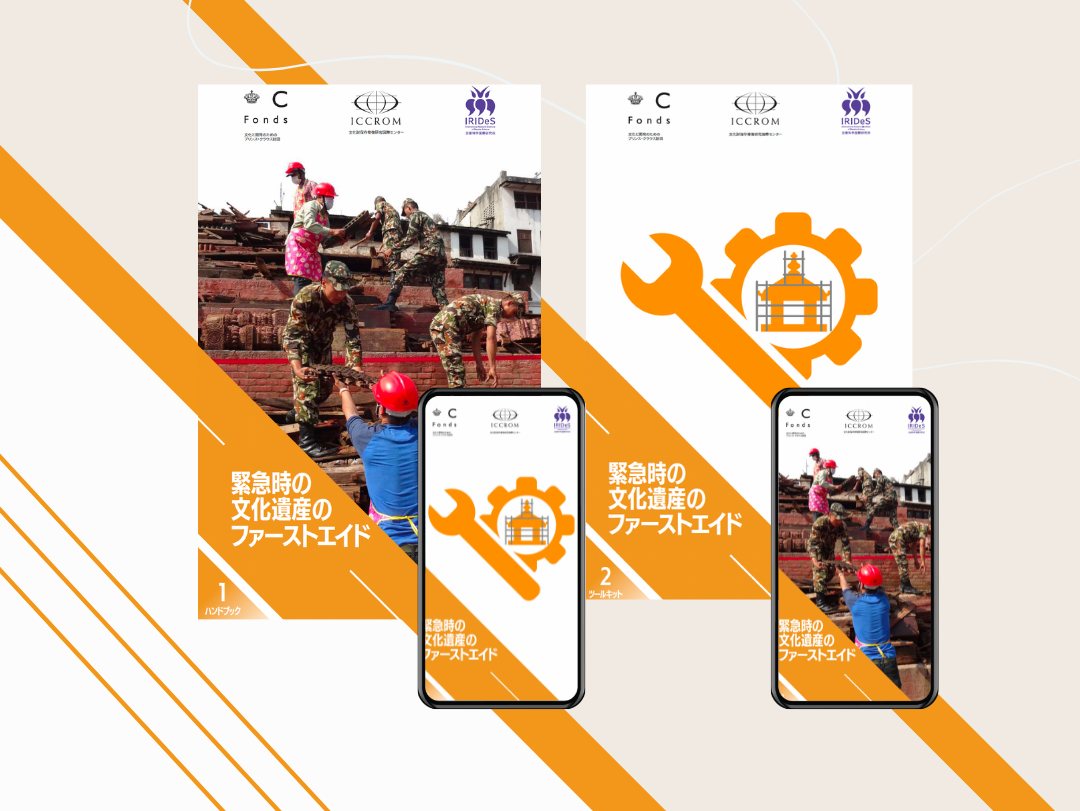 First Aid to Cultural Heritage in Times of Crisis is a two-part publication created for the various actors involved in an emergency. The Handbook provides a practical method and a set of "ready-to-use" tools for securing endangered cultural heritage, both tangible and intangible. By providing this guidance, ICCROM-FAR aims to empower frontline communities to take action and participate in their cultural recovery.

This resource was written with the key guiding philosophy of ensuring an inclusive attitude and respect for diversity while interlocking humanitarian assistance with cultural heritage first aid. It provides an essential ethical framework that will lead to successful outcomes.

ICCROM-FAR team members Jui Ambani, Disaster Risk Management and Climate Action, and Mohona Chakraburtty, Climate Action and Peacebuilding, had a candid conversation with Machiko and John to give vital insights on how heritage can help us overcome the sense of loss and displacement caused by a disaster. Tune into the discussion and hear their stories here. The video narrates personal examples of their work and how they came to translate this tool into Japanese.

We are grateful to Machiko and John for voluntarily translating the Handbook into Japanese and for taking the time to share their experiences and insights.

This publication was authored by Aparna Tandon with contributions from renowned disaster risk management specialists, architects and engineers.

In addition to Japanese, the First Aid to Cultural Heritage in Times of Crisis - Handbook and Toolkit is available in English, French, Arabic, Turkish and Portuguese. Wherever you are, use the handbook to empower community action and grow ICCROM’s network of first aiders. Download the resource, save it to your phone and share it with as many people as possible so that together we can improve emergency preparedness and response and build resilience for cultural heritage worldwide.

To reach Machiko and John and to learn more about their work, write to: far_programme@iccrom.org

Coming soon, First Aid to Cultural Heritage in Times of Crisis - Handbook and Toolkit in Spanish and Ukrainian.