Delegation from the Republic of Uzbekistan 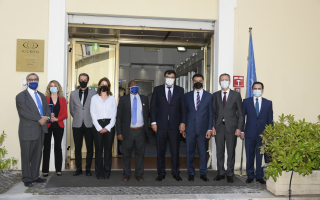 Discussions focused on the process currently underway for Uzbekistan to become a Member State of ICCROM.  As a first formal step in this process, a Memorandum of Understanding was signed in order to establish a framework of cooperation between ICCROM and the Ministry of Tourism and Sports of Uzbekistan.  Areas of potential cooperation include building capacity for the better safeguarding of UNESCO World Heritage properties, Urban conservation and the Historic Urban Landscape, interlinkages between cultural and natural heritage, and collaboration with Uzbek universities on developing curricula for safeguarding cultural heritage. Both parties agreed to continue discussions to develop specific pilot initiatives to put the MoU into action.

The delegation of Uzbekistan briefed on some very bold steps taken under H.E. Shavkat Mirziyoyev, the President of the Republic of Uzbekistan, to safeguard, restore and promote the country’s cultural heritage. The Uzbek side reiterated its readiness and commitment to establish systematic and institutional relations with ICCROM to employ fully the existing potential for cooperation in these areas.

ICCROM is particularly pleased to have welcomed the Deputy Prime Minister and Minister of Tourism and Sport, and looks forward to working closely with Uzbekistan for the conservation of this rich cultural heritage at the crossroad of civilizations.