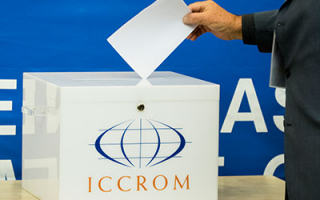 ICCROM's General Assembly elects a body of Council to monitor the activities of the organization, and formulate long-term policies in close collaboration with the Director-General.

The Council is composed of 25 persons serving for a mandate of four years, and six ex officio members representing UNESCO, the Italian Government, Instituto Superiore per la Conservazione ed il Restauro, as well as the International Council of Museums (ICOM), the International Council on Monuments and Sites (ICOMOS) and the International Union for Conservation of Nature (IUCN). Council members are elected by the General Assembly from within its member states and can serve for a maximum of two consecutive terms.

This year at the 31st General Assembly, elections will take place to appoint 12 new members who will serve in the ICCROM Council during the term of 2019-2023.

The current Council Members are listed below. Underlined members are those whose first or second mandate expires in 2019.