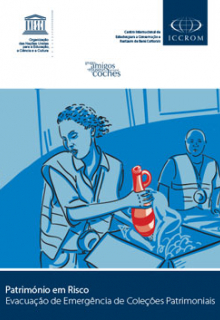 ICCROM is proud to announce the release of the Portuguese version of Endangered Heritage: Emergency Evacuation of Heritage Collections translated by the Grupo de Amigos do Museu Nacional dos Coches (GAMNAC), in collaboration with ICOM Portugal and ICOMOS Portugal.  The project was coordinated by ICCROM Council Member Isabel Raposo de Magalhães, and is co-published by GAMNAC, ICCROM, and UNESCO.

The publication provides step-by-step guidance for evacuating cultural collections under extreme conditions. It is meant to assist those communities and institutions, which are trying to prevent the destruction and looting of cultural objects during a crisis situation. It can be used to train others and to improve emergency preparedness at cultural sites.

By making the text available in multiple languages, it is hoped that contents can be used by as many professionals as possible, acting as a quick-reference guide for cultural heritage rescue in the field. It has been created with a variety of users in mind, with simple language and layout intended for heritage personnel, emergency responders and civilians alike. It complements the research and activities of ICCROM's First Aid and Resilience for Cultural Heritage in Times of Crisis programme, as well as ICCROM's efforts to publish material in as many languages as possible.

The new translation sits alongside others in Arabic, French, Georgian, Japanese, Nepali, and Russian, bringing the total number of versions available to eight (including the English original). Versions in Farsi, Italian, Spanish and Turkish have also been planned for the near future.