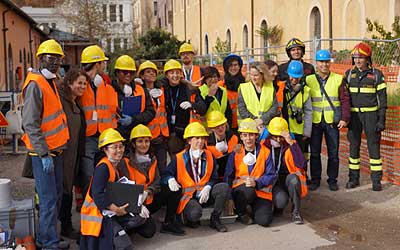 The eighth international First Aid to Cultural Heritage in Times of Crisis (FAC) course concluded on 6 December at ICCROM’s headquarters in Rome. For four weeks, 16 participants from 14 countries (Chile, Egypt, Estonia, Georgia, Honduras, India, Iraq, Italy, Japan, Spain, South Sudan, Syria, Trinidad and Tobago, and the United States) were joined by five mentors and teaching experts from around the world to work in Rome and in the town of Norcia.

The course brought together experts from several fields of expertise that included cultural heritage, disaster risk reduction, urban resilience, mediation, climate variability and humanitarian aid. Through the FAC training, they learned how to mitigate the disaster risks and prevent damage to cultural heritage in crisis situations and take the necessary steps to ensure early recovery post-crisis.

Built into this was an emphasis on factors such as climate change and tensions that can increase the impact of disasters, and focus on the importance of building resilience. The FAC course provides field-tested strategies for wider integration with first response, civil protection, humanitarian aid and development sectors.

In Rome, an intensive timetable saw participants engage in sessions that varied from lectures and presentations to group discussions, debates, and workshop exercises.  The various topics included:

These sessions were crucial for understanding the connections between core theoretical concepts, policymaking, and practice 'on the ground'.  In order to put theory into practice, the participants were given the opportunity for hands-on learning in Norcia, a town in the Umbria region which suffered extensive damage in a series of earthquakes in 2016, and in a final simulation in Rome, where everything the participants had learned prior was put to the test.

On the second week of the course, participants, mentors, teachers, and other staff relocated to the small town of Norcia, Umbria – an area rich in both tangible and intangible heritage.  The earthquakes that shook Central Italy in August and October 2016 proved devastating for the town; many buildings were either destroyed or severely damaged in their aftermath, including churches and other cultural centres. These circumstances provided the setting for additional theoretical and practical teaching on cultural heritage first aid in a 'real-life' context.  The training concentrated on damage and risk assessment, tools for documenting damaged sites, first aid for saving lives and working in disasters, the emergency stabilisation of structures damaged during a hazard event, and the salvage of movable objects.

A core part of the FAC training was the interaction and consultation with members of Norcia's community , which provided the participants with a real life experience of understanding how culture matters during and after a crisis. Many inhabitants in the region were displaced following the 2016 earthquakes, and the trauma of losing their homes, their livelihoods, their heritage and in consequence also some of their traditions affected people across all age groups.

Bringing together classroom learning with practical fieldwork alongside a real community affected by disaster proved to be one of the most important parts of the FAC programme, and beneficial also for people of Norcia and nearby towns, who were able to have their voices heard and know that their plight was not forgotten.

The FAC course in Italy comprised the second phase of a nine-month-long programme, with the first phase earlier this year consisting of pre-course mentorship training. This training phase gave all of the FAC participants a chance to familiarize themselves with key concepts from the worlds of cultural heritage preservation, disaster risk management, and humanitarian aid.  It has also allowed them to prepare for the final phase, in which the newly qualified FAC trainees will pass on their knowledge by organizing follow-up trainings of their own.

FAC 2019 was organized by ICCROM alongside the Swedish Postcode Foundation, the Smithsonian Institution, and the Prince Claus Fund, in collaboration with the following:

ICCROM would like to thank the people of Norcia for their support, hospitality, and assistance during FAC training, and is grateful for the cooperation of local partners.