ICCROM to participate in National…

ICCROM to participate in National Museum of Brazil restoration 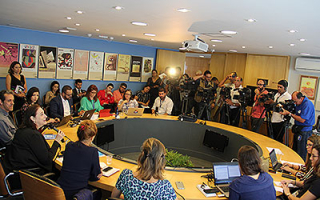 ICCROM joined UNESCO on an Emergency Mission for the National Museum of Brazil from 13 to 23 September 2018. Experts met with Brazilian authorities and national and local actors involved with the Museum, and took part in two technical visits to the site. The aim is to help the country define what will be the next steps for recovery.

UNESCO has offered to coordinate the international support to be provided, whether through technical experts, financial contributions, and donations or loans of collections from other museums that have duplicates or similar items to those of the National Museum. Governments, museums and institutions from countries such as Argentina, Canada, France, Germany, Italy, Spain, and the United States have already offered to help.

“We are very optimistic because we see a great wave of international solidarity and a significant effort by the Brazilian government to address this urgent situation quickly," said the Director and Representative of UNESCO in Brazil, Marlova Jovchelovitch Noleto.

“Museums play a fundamental role in society, representing the diversity and cultural richness of humanity. In the case of the National Museum, it was also a historic building and an educational and research institution,” she added.

“We hope that the museum will be rebuilt and open its doors with all its previous activities, counting on the generous support of the international community, UNESCO and the Brazilian government, which has supported the emergency actions during this first phase.”

The head of the mission, Cristina Menegazzi (for UNESCO) thanked the various institutions involved with the National Museum, such as the Ministry of Education (MEC), Ministry of Culture (MINC), the Federal University of Rio de Janeiro (UFRJ), the Brazilian Institute of Museums (IBRAM), the National Institute of Historical and Artistic Heritage (IPHAN) and the International Council of Museums (ICOM). 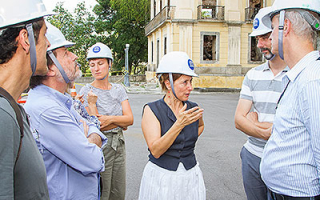 “It is very important that we work with all the institutions that can directly or indirectly support the mission,” she said, adding that “the Museum’s collection is well inventoried, which is very helpful in the identification process of the objects that might still be found within the Museum and those that have been lost. This is the first step to rebuild the collection.” Menegazzi also pointed out that the inventory has a great deal of information about items in the collections, which is essential for the objects to be either restored, replicated or at least become part of documental collections about what was in the Museum.

Menegazzi also said there is a chance that some of the collections will be recovered. However, it is still not possible to estimate which ones exactly, since the technical teams have not yet been able to enter the Museum for security reasons, as the police are still investigating the fire. She clarified that the work of rebuilding the Museum building and its collection is estimated to take several years, as it is a complex process and requires the involvement of a multidisciplinary team. The team is yet to be defined for each stage, based on the expertise required to act in each step.

ICCROM’s Project Manager for Collections, José Luiz Pedersoli Júnior, was also part of the mission, and explained that the Museum is already mapping the collections in the different floors and rooms. This is being done in order to define the degree of priority in terms of vulnerability and cultural and financial value. Based on the mapping, access routes will be created to rescue priority items.

Pedersoli explained that the work is complex in all its phases: material sorting, conservation, documentation, cleaning, packaging, and temporary storage. Items of the collections can only be put on display again once all these steps are completed and the museum reconstructed.

Based on the “Recommendation concerning the Protection and Promotion of Museums and Collections, their Diversity and their Role in Society”, a document approved in 2015 by the UNESCO’s General Conference, and on the mission’s visits, UNESCO will provide recommendations to the Brazilian government to mitigate the occurrence and the impacts of disasters on Brazilian heritage institutions.

According to Pedersoli, “It is important to promote a culture of prevention from risks, such as fires, floods, and other types of disasters. We cannot simply respond to disasters and recover what has already been damaged.” 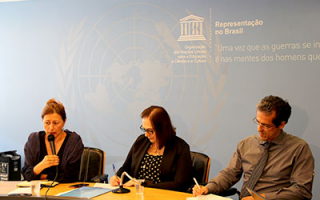 The UNESCO mission is funded by UNESCO’s Heritage Emergency Fund, created in 2015 to strengthen the ability of Member States to prevent, mitigate and recover cultural heritage and cultural diversity resulting from conflict and disaster.

The UNESCO mission team is multidisciplinary and, in addition to Cristina Menegazzi and José Luiz Pedersoli Júnior, includes two German experts in disaster prevention and management. Ulrich Fischer and Nadine Thiel led the rescue and preservation of documents and items from the Public Archive of Cologne, which collapsed in 2009. Together they founded a support network, composed of 24 archives and libraries from Cologne, to discuss and implement strategies in risk management, focused primarily on the preservation of documents.

UNESCO will also document the whole process, with the purpose of disseminating and guiding Member States to confront or avoid risk situations.