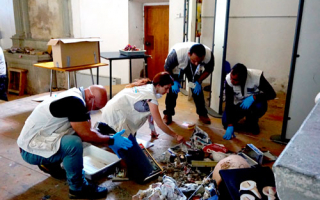 In the immediate aftermath of a large scale emergency, the top priority is to save lives and restore communication and access to vital resources. Depending on the scale of the emergency, civil protection plays a pivotal role in the coordination of an emergency response.

Given their role as emergency responders, is it possible for national civil protection authorities to extend their roles to include the coordination of safeguarding cultural heritage during an emergency?

The Italian Department of Civil Protection, or Protezione Civile, believes so.  It has worked to secure and salvage cultural heritage affected during most of the emergencies affecting the country over the past 20 years, including the 2016-2017 earthquakes in Central Italy.

Twenty-five participants were drawn from the five partner areas of PROMEDHE, and included Cypriots, Israelis, Italians, Jordanians and Palestinians, in addition to delegates from France and Spain. Hosted at the Fondazione Hallgarten – Franchetti Centro Studi Villa Montesca in Città di Castello, Umbria, Italy, the course aimed to provide participants with the knowledge and methodological framework necessary to safeguard and salvage heritage assets including movable and immovable, tangible and intangible elements, in the event of hazard-induced emergencies and in the post-emergency phase.

The programme devised by ICCROM took participants through a series of structured learning and practical sessions, based on a three-step framework for the safeguarding of cultural heritage. The framework is derived from the international course First Aid to Cultural Heritage in Times of Crisis and extensive field experience. The participants completed modules on each step: Situation Analysis; On-site Survey; and Security and Stabilization.  These modules culminated in a final simulation exercise located in nearby Lugnano, incorporating all steps.

The course ended with an illuminating discussion based on real-life examples of the safeguard of cultural heritage damaged during the recent earthquakes in Central Italy.  The lecture was given by the Italian Ministry of Cultural Heritage and the Civil Protection of the Umbria region.  The learning experience was enhanced with guided field visits to temporary shelters housing displaced artefacts from cultural heritage sites, churches, and museums. 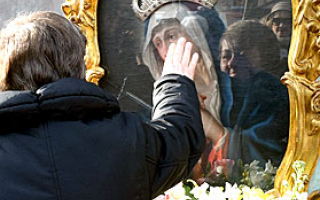 An example of the importance of cultural heritage to communities can be seen through the value of the Madonna Addolorata to its local community in Norcia. This religious artefact has been salvaged unharmed through four large earthquakes that have impacted Central Italy over the past four centuries.  Community members often pray to it for protection for themselves and their families. The value of this object is both physical and strongly connected to the wellbeing of the community. It is for just such reasons that cultural heritage must be included in emergency response.

The PROMEDHE training course provided ICCROM with a valuable opportunity to collaborate with civil protection and cultural heritage professionals.  It also provided evidence on the need to protect cultural heritage and its integration into mainstream emergency response. For disaster-affected communities to recover fully, the attention that must be paid to the recovery of cultural heritage is clear.

“Cultural heritage is our history, identity, beliefs and traditions. If we lose it, the future of humanity will be permanently damaged” – 2017 PROMEDHE participant.

“Cultural heritage is the expression of humanity, of a community, of the people’s way of thinking and it can show the changes and evolution of society, community and mankind… It’s a cultural anchor for human development in times of crisis.” – 2017 PROMEDHE participant.