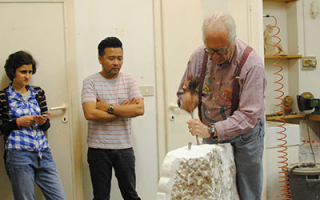 Peter Rockwell, sculptor, expert in the history and techniques of stone carving, and frequent lecturer on ICCROM courses, died at Danvers, MA, USA on 6 February 2020 at the age of 83.

There are numerous conservators around the world who, as former ICCROM course participants, will remember fondly being taught by Peter Rockwell. As a practicing sculptor Peter had made himself unusually knowledgeable about the history of his craft. He was therefore greatly in demand as a teacher and consultant. From its inception in 1976 he lectured on the biennial UNESCO-sponsored stone conservation course in Venice (transferred to ICCROM in Rome in 2011); but also, from the early 1980s, on ICCROM’s regular, annual courses on mural paintings, architectural conservation and the scientific principles of conservation, amongst others. Participants would arrive in the classroom to find a fearsome array of tools (picks, points, chisels, hammers and so on) on display. The instructor, in his resonant voice, would guide us through the sculptor’s use of different tools to produce the works of art which conservators or conservation scientists had first to understand before attempting to preserve them. We soon realised that the confidently loud voice was born of expertise, an intimate working knowledge of stone’s properties and how it has been carved for millennia. Peter’s guided visits to quarries, whether of travertine at Tivoli, peperino at Marino or marble at Carrara, were unforgettable experiences for relating classroom teaching to the sources of the raw material in the field.

After a degree in English literature from Haverford College in Pennsylvania, Peter studied sculpture at the Pennsylvania Academy of Fine Arts. By then he was married to a friend from high-school days, Cynthia (“Cinny”) Ide. A grant in 1961 allowed him, with Cinny and their 18-month-old son Geoffrey, to travel by sea to Italy to study the Carrara marble quarries. This trip was decisive. The family transferred to Italy, settling in Rome until Peter moved back to the States in 2017 (Cinny, also well-known in the ICCROM world for her influential role as head of communications and publications for seventeen years, had died four years earlier).

From his studio in Monteverde Vecchio Peter produced sculptures for exhibition and sale both in Italy and back in the States. He worked in stone but also in bronze, wood and clay, producing resin casts. He won important commissions at his alma mater Haverford College, in Washington Cathedral, D.C., in Plymouth, Michigan, in Philadelphia, PA, at Stockbridge, Massachusetts and at Chioggia in northern Italy. The American church of St. Paul’s Within the Walls in Rome, where he was a parishioner for over 50 years and a Senior Warden, has a number of his works on display. 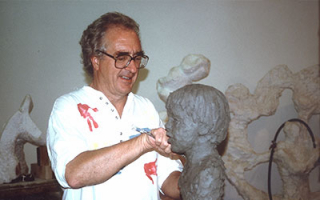 As well as lecturing widely and teaching for ICCROM, for the Istituto Centrale per il Restauro and for art history classes at international schools in Rome, Peter was called in to advise at well-known heritage sites in Italy and abroad (e.g., at the Aphrodisias archaeological site in Turkey). In Rome his expertise was often in demand by the conservation practice Cooperativa CBC, for example for their restoration of the Trevi fountain. His studies made from the scaffolding erected around Trajan’s Column for its conservation treatment in the years 1981-88 led to new insights about the iconography and the carving techniques of its remarkable marble reliefs. They also led eventually to Peter donating, along with 30,000 slides and numerous publications, to the ICCROM archive his invaluable written and photographic documentation of the column.

Much of Peter’s expert knowledge (as revealed in his “The Art of Stoneworking”, Cambridge, 1993) is now on digital record and, beautifully illustrated, in his “The Compleat Marble Sleuth” (2004), a volume of which the author was, with justice, particularly proud. That expertise he transferred in recent years to the quite different cultural context of India where he worked as a consultant to Dr Vidya Dehejia (“The Unfinished: The Stone Carvers at Work in the Indian Subcontinent”, Roli Books, 2016). His being invited to assess the authenticity of the Getty kouros sculpture led to an unexpected outcome: at a time when there were signs of a scholarly consensus about its lack of authenticity, Peter’s opinion was cautiously contrary. The statue’s carving techniques were genuinely archaic Greek, techniques that had never, to his knowledge, been mastered by the great fakers of recent centuries; and, conversely, he could find no tell-tale traces of the modern fakers’ usual techniques.

As the son of a famous artist (Norman Rockwell), Peter had established his own ‘space’ by moving to Italy. Especially in later years he worked closely with the Norman Rockwell Museum in Stockbridge, MA, donating examples of his own sculptures and helping to curate exhibitions about his father’s and his own work. When, in 2014, the museum’s exhibition “American chronicles” featuring Norman Rockwell’s work travelled to Rome, Peter’s immediately recognisable voice welcomed visitors on the introductory video and he himself played a proud role as host, guide and story-teller to the many visitors to this extremely popular show. 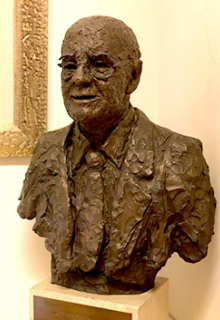 A life in art and in education, in short, one from which ICCROM benefitted in many ways in addition to his teaching. The bronze bust (1995) of Harold Plenderleith, ICCROM’s founding Director, is Peter’s work, as is the bronze figurine symbolising “Conservation” received by the distinguished winners of the ICCROM Award. Peter created his own work as a sculptor while enthusiastically promoting appreciation of the centuries-long history of his craft, in the classroom but also in his studio where he welcomed younger conservators to ‘try their hand’ at carving stone. And always a stream of amusing anecdotes, reminiscences and insights into the art and the artists of his adopted country. He will be much missed by his brothers, children and grandchildren and by all those around the world for whom Peter’s teaching was an unforgettable part of our formative experience at ICCROM.