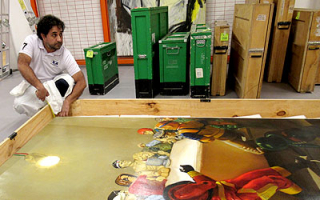 In November 2011, the delegates of the 27th General Assembly of ICCROM supported a resolution underlining the “worldwide problem of conservation and access in museum storage.”  They suggested that ICCROM engage with countries to improve the present situation. Since then, ICCROM has assisted with storage facility reorganization projects in Algeria, China, Croatia, Greece, India, New Caledonia, and Serbia. Furthermore, four countries have launched national strategies: these include Belgium, Canada, Chile and Nigeria.

In the framework of the Chilean national strategy, the National Centre of Conservation and Restoration (CNCR) and the National Sub-Directorate of Museums (SNM), both of which are under the structure of the National Service for Cultural Heritage of Chile, have organized a course to re-organize the storage and deposit areas of the Cerrillos National Centre for Contemporary Art (CNAC).

From 27 August to 7 September, nineteen Chilean and two Uruguayan professionals joined ten coaches trained in 2017. They worked with three important collections containing more than 400 pieces in total. Some of these collections are contemporary art installations made up of multiple objects. One installation has just returned from the Venice Biennale, and contains 1100 objects.

In ten days, equivalent to 2400 work hours, the storage areas were reorganized according to the ten quality criteria defined by the RE-ORG method.

Beatriz Salinas, Director of CNAC, said:  “We have now a deposit arranged in such a way that we can organize public visits on specific occasions.” 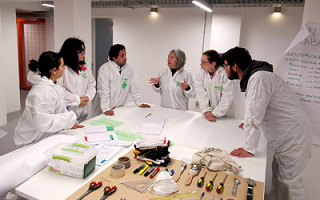 Upcoming RE-ORG courses will take place in October in Portugal, in December in Kuwait, in January 2019 in Albania, and in February 2019 in Madagascar.