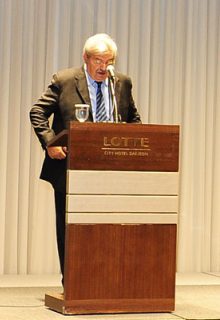 On 25 October 2017, the Cultural Heritage Administration of the Republic of Korea (CHA) and the International Centre for the Study of the Preservation and Restoration of Cultural Property (ICCROM) signed a Framework Arrangement in Daejeon, Republic of Korea.  This marks the second phase of the collaboration embarked upon in 2012. Under this Framework Arrangement, the two institutions agreed to pursue cooperation for education, training and research in cultural heritage conservation in the Asia Pacific region during the period of 2018-2022. The arrangement was signed by the CHA Administrator, Kim Jongjin, and by ICCROM’s Director-General, Dr Stefano de Caro.

The signing of the arrangement was the occasion for a joint public conference reflecting on the activities of the past five years and identifying future areas of cooperation. The 2017 CollAsia course was concluded during this event, while the final Annual Thematic Forum was opened in the goal of taking stock of the previous four Thematic Fora and reflecting the collaboration between CHA and ICCROM.

For the past five years, from 2013 to 2017, CHA has supported training activities in line with the CollAsia programme previously implemented by ICCROM, together with an annual Thematic Forum on selected topics of common interest. While focusing on Asia in particular and contributing to the regional capacity-building processes, the programme has also proved beneficial on a global scale, with professionals from around the world working to understand key conservation concepts in an Asian context.

Since 2013, the Annual Thematic Forum has explored themes such as Asian Buddhist Heritage: Conserving the Sacred (2013), Authenticity in Asian Context (2014), 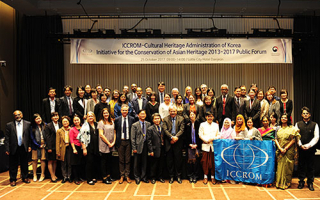 This Framework Arrangement represents the close partnership and collaboration between ICCROM and the Republic of Korea, which has been Member State of ICCROM since 1968. Within the renewed Framework Arrangement, CHA and ICCROM will explore new areas of activities while utilizing the accumulated knowledge and information from the past five years. ICCROM will continue to address the capacity-building needs of the Asia Pacific region in all aspects of heritage conservation, with objectives of promoting heritage as a contributor for sustainable development in the region and around the globe.