Visit from Iraqi Minister of Culture

Visit from Iraqi Minister of Culture 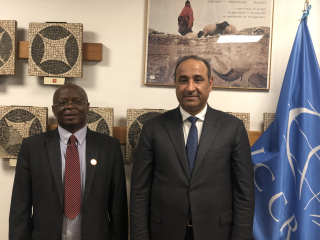 The visit came as ICCROM spearheads a two-year capacity building programme in Iraq’s second-largest city Mosul, which suffered heavy damage as a result of its occupation from 2014 to 2017. The Director-General said the pioneering project aimed to provide the city’s young architects, engineers and craftspeople with skills for recovering cultural heritage, focusing on sustainability and resilience.

Updating Minister Al-Hamdani and Mr Al-Ani on the project, Mr Jigyasu conveyed ICCROM’s hope that the training would have a positive impact on the livelihoods of people in Mosul, with the key to its success being collaboration with local institutions, including the University of Mosul.

Minister Al-Hamdani expressed his government’s appreciation and support for ICCROM’s current work in Mosul and past contributions towards protecting and managing Iraq’s cultural heritage sites and institutions. Noting the importance of Iraq as a Member State, the Director-General vowed that ICCROM would continue to do all it can to help conserve Iraq's ancient and diverse heritage, which is of great value to humanity.

ICCROM is pleased to have welcomed the Minister and the First Secretary to its headquarters and looks forward to continuing its close working relationship with Iraq and its people.