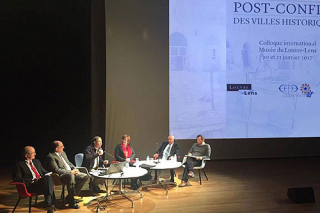 A special symposium on post-conflict reconstruction of historic cities, organized by ICCROM, the Louvre-Lens Museum and the Institut du monde arabe in Tourcoing, was held in Lens, France on 20 – 21 January 2017.

Over the course of the two-day symposium, experts gathered to discuss the various actions of international organizations for post-conflict reconstruction of historic cities.  They presented the state of theoretical developments in this field, and discussed several case studies in Europe and the Middle East in order to draw potentially relevant lessons for the future.

At the end of the first day, the participants evaluated the legal, social, economic and political impact of reconstruction actions, while the second day focused on the role and activities of donors and development agencies in the financing of post-conflict reconstruction projects.

At the end of the symposium, the Assembly was able to draw conclusions and indicate points for reflection as well as concrete short-term measures to be undertaken.

An important first step in post-conflict reconstruction is to arrive at a global overview of the current situation through a preliminary assessment and questioning of instruments and tools, including legal ones, which have been unsuccessfully applied to date. The objective is to guarantee that the reconstruction project can be carried out sustainably, with specific and targeted plans for each phase before, during and after the stage of reconstruction.

The presentations, observations and comments expressed during the brief discussion periods led to several conclusions:

At the end of the symposium, a number of short-term actions were agreed upon, including developing effective documentation tools for fieldwork. The papers arising from the symposium will be published, and recommendations arising from the discussions will be drafted and shared with donors and development agencies.