Italy: Garden of Ninfa and the ruins of S. Maria Maggiore church 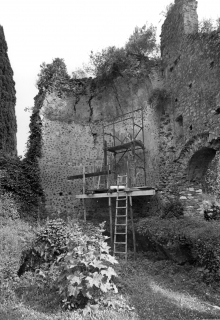 A unique setting rich with flora and fauna, the Garden of Ninfa is an English-style landscape park in the Latina province, recognized as an Italian natural monument. The park was the site of a medieval village of the same name.

Once a bustling settlement comprising houses, several churches, mills, bridges, a castle and a town hall, over the centuries the village was gradually abandoned, with only the ruins of some main buildings left standing today.

Between the late 1960s and early 1970s, ICCROM carried out restoration works on frescoes in three churches at Ninfa – S. Maria Maggiore, S. Biagio and S. Salvatore – as part of our then International Mural Painting Conservation course.

As the frescoes had long been exposed to the elements, most were detached by the course participants and transferred to Caetani Castle in nearby Sermoneta, under the direction of the renowned conservators Paolo and Laura Mora (who later donated their important collection of rare material samples to us) and Sergio Lancioni.

This photo, taken by Franco Rigamonti in 1971, depicts the apse of the Church of Santa Maria Maggiore, where traces of mural paintings from dating from between the 9th and 11th centuries can be seen behind the scaffolding. It’s one in a series from our archives documenting the restoration works carried out on the churches, including reports on the process of detaching the frescoes between 1968 and 1971.

Also available are aerial photographs by the Istituto Geografico Militare (IGM) and measured drawings of the garden from the late 1980s.