In the northern hemisphere, the month of March marks the beginning of spring, a season synonymous with new beginnings. In this spirit, our resource of the month is not only a beautiful book, but the announcement of a new chapter for our library, as we open an area dedicated to literature for children and young people. 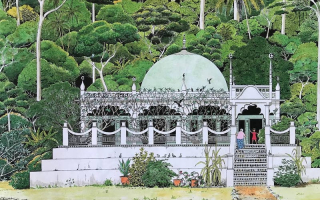 We can’t think of a better way to celebrate than with Fatimah’s Kampung by Iain Buchanan, which was published by the Consumers’ Association of Penang in 2008. Like so many of our books, it was donated by one of our Member States. We’re always grateful to receive donations, as they help us expand our collections and often add resources that are rare or not easily available, ensuring our library reflects the diverse cultural heritage of our world.

Over 120 pages, Fatimah’s Kampung tells the story of a girl named Fatimah, who grows up in a traditional village between the borders of the Malaysian jungle and the outskirts of a growing urban settlement. The first three chapters focus on her home life, her family, and the people in the village. This includes Fatimah’s special relationship with her grandmother, who introduces her to the traditions and memories of their culture.

Listening to the voice of the narrator, the reader is immersed in Fatimah’s vividly drawn cultural and natural world, which centres on her garden and the surrounding forest. Then the story takes an unexpected turn. Fatimah grows up and her surroundings change, with the growing city gradually threatening the village’s existence and its environment. By the final chapter, the villagers are relocated and the village turned into a museum. 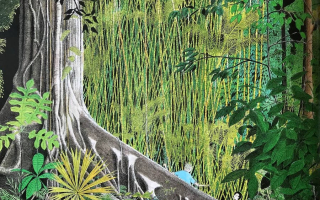 We chose to promote Fatimah’s Kampung as the inaugural resource from our new children’s section because it is a very touching and interesting book, with rich illustrations capturing the dramatic events that endanger the cultural and natural landscape inhabited by the main characters. It explores important themes in the time of growing megacities.

Our attention was also drawn to the preface, in which Buchanan writes the following about himself, his life and the inspiration he found in Fatimah’s village:

“I knew I had to be a storyteller, not a teacher; I had to communicate my ideas, the same ideas I had lectured on, in ways that were vivid and exciting, rather than sober and intellectual precise. For the world was in a dire state, and academic debate seemed to be the last thing we needed. It seemed far more important to get people, especially young people, to reconnect with the earth they occupied in ways that were heartfelt and spiritual, and above all creative. Yes, they needed to understand something of the physics of global warming. But they had also needed to find the beauty, and the fragility, of the landscape they belonged to – to feel a sense of belonging, a sense of landscape as home, and to know what happens when this is lost.”

This passage reflects why we’ve decided to build this new collection of library resources for children and young people, to give them the opportunity to engage with cultural heritage’s diversity and significance through reading and storytelling.

We hope to fill it with many multilingual and multicultural resources, so if you have any you’d like to suggest, please email us at library@iccrom.org