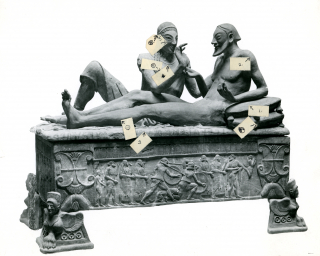 This Etruscan sarcophagus with a couple reclining on the lid dates from between 550-525 BCE and was excavated in Caere (present-day Cerveteri), Italy. At least, that is what was once claimed, before it was revealed to be a fake!

According to the British Museum, where the sarcophagus is held, some key details gave it away, not least the “nineteenth century undergarments” worn by the female figure. Others include the couple’s pose and the male figure’s nudity, noted as being decidedly un-Etruscan, and the inscription, which was discovered to be “copied from a gold brooch at the Louvre”.

These are possibly some of the errors indicated by the numbered tags shown in this old photograph of the sarcophagus, which is part of a series depicting fakes and forgeries uncovered in museums. The intriguing collection was incorporated to the ICCROM Archives in the 1970s and constitutes some of our oldest photographic material.

While data is limited, the photo’s connection to the British Museum suggests it probably came to us courtesy of Harold J. Plenderleith, who retired from that institution in 1959 to become the first Director-General of ICCROM. Indeed, as a conservator and archaeologist, he may have taken it himself, while carrying out analysis on the sarcophagus to provide scientific evidence of its forgery.

Plenderleith had form in this regard, having been among an international group of experts, including Paul Coremans, founder of KIK-IRPA, called in to assess the authenticity of eight paintings by Vermeer and de Hoogs and determine if they were really the work of infamous Dutch art forger Van der Meegeren.

The photo of the bogus sarcophagus, meanwhile, includes a combination of hand-written Roman and Arabic numbers on the back, which are probably plate numbers and may also mean the images were used in one of Plenderleith’s many publications.

Our photographic series of fakes and forgeries is not limited to those in public collections either – Coremans provided images of questionable pieces from the private collections of Brussels too. All of which goes to show that even the most treasured objects are not always what they seem!