Afghanistan: The shrine of the Small Buddha 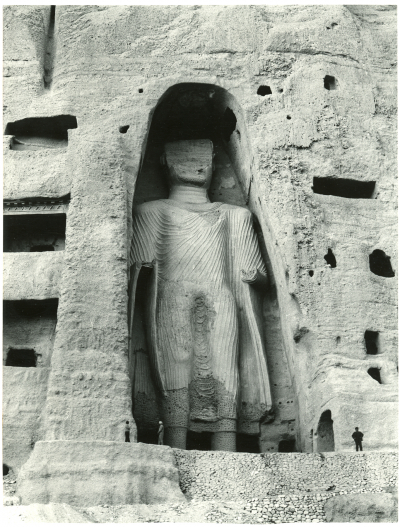 With this photo, ICCROM Archives presents a new section that will showcase its valuable collection.

We will initially focus on our older photographic collection spanning from 1952 to 1985. Composed of photographic prints and organized by country, we kick off this series with pictures of Afghanistan’s heritage.

This photo is of the shrine of the Small Buddha (35 metres high) in the Bamiyan Valley, taken after the restoration work carried out between 1969-1973 by an Indo-Afghan team of experts. The work included removing the modern building constructed around the feet of the Buddha; stabilizing the legs of the statue; restoring the Buddha's dress; reinforcing the crack on the west wall of the shrine with mild steel rods; restoring and finishing the surfaces with a coat of plaster; installing a drainage system to discharge the snow-water from the facade; and inserting a protective rock roof.

The photo was brought to ICCROM by Rakhaldas Sengupta, a former ICCROM Council Member and head of the team that restored the Great Buddhas of Bamiyan. Regretfully, this statue, together with the Big Buddha, were destroyed in March 2001.