Completion of training course in Byblos… 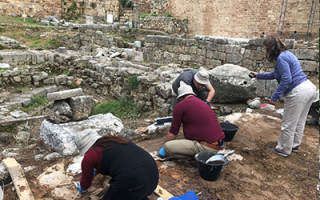 Mosaics heritage is increasingly threatened by modern construction, looting and lack of qualified personnel to carry out much needed conservation and maintenance work.  To address this need, a five-week international training course for the conservation of in-situ mosaics was held from 26 March to 26 April 2019, at the ancient site of Byblos, Lebanon. The training event, which included six DGA Lebanon employees and six government employees from Libya, Jordan and Palestine, was developed to enhance the capacity of national authorities responsible for archaeological sites in the Middle East and North Africa to conserve their mosaic heritage. The event was carried out jointly by ICCROM, the Directorate General of Antiquities of Lebanon (DGA), and the Getty Conservation Institute (GCI).

The training included classroom lessons and practical exercises at Byblos, on one of the few remaining mosaics left in situ at the site. The conservation technician trainees learned a methodology for documenting and conserving mosaics using lime mortars to stabilize them, as well as how to carry out preventive conservation measures such as reburial and drainage of mosaics.

This training event complements an earlier training course held at Byblos in fall 2017 for the conservation of lifted mosaics removed from their original locations. That course, which included participants from Lebanon and Algeria, was organized by the DGA and ICCROM with support from the Getty Foundation. 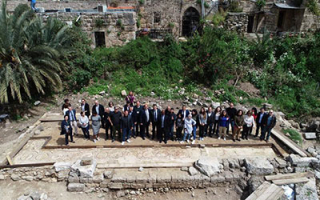 According to Sarkis el Khoury, Lebanese Director General of Antiquities, “Lebanon is one of the first countries to be part of the MOSAIKON initiative, and has developed an advanced conservation strategy for mosaics preservation. A qualified team from the DGA has created a Mosaics Conservation Unit which is enlarged progressively by trained technicians. The Regional Center for the Restoration and Conservation of the Lebanese Heritage (CRCPL), which hosts this training worksite, has been put in place in order to ensure the transmission and sustainability of these conservation skills.”

“The training in mosaic conservation in situ contributes to ICCROM’s strategic directions aimed at building institutional capacities in the region,” says Webber Ndoro, Director-General of ICCROM.  Added Zaki Aslan, Director of ICCROM’s Regional Office in Sharjah, UAE, “Such training worksites have been part of ICCROM’s work in the Arab region through its Regional Office in Sharjah serving the Arab Member States.  ICCROM aims to consolidate a partnership with the GCI and CRCPL for future worksites.”

“The GCI’s training worksite at Byblos would not be possible without the continued support of our project partners in Lebanon and their commitment to the protection of this vital cultural heritage,” says Jeanne Marie Teutonico, Associate Director of Programs, with the Getty Conservation Institute. “We are proud to have helped the development of skilled practitioners to implement mosaic conservation activities in Lebanon and in other countries that have been a part of the MOSAIKON initiative.” 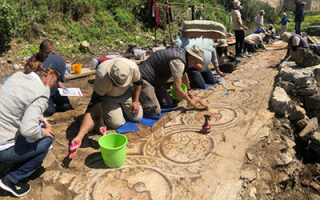 The international team of instructors, including university teachers and conservators, ensured the highest quality in theoretical and practical training in this short course, one of the last organized under the umbrella of the MOSAIKON initiative, a collaboration of the Getty Conservation Institute, the Getty Foundation, ICCROM and the International Committee for the Conservation of Mosaics (ICCM).

Since 2008, the MOSAIKON initiative has trained over 200 conservation professionals from countries of the southern and eastern Mediterranean region.  It has also carried out research and model field projects to illustrate best practice, and strengthened the professional network through regular meetings of national heritage leaders and funding for participation in international conferences. Directors or representatives of three of the four organizations will be present in Byblos on 24 April to mark the end of this training program.