Designing for Change: International Workshop on First Aid for Cultural Heritage in Times of Crisis 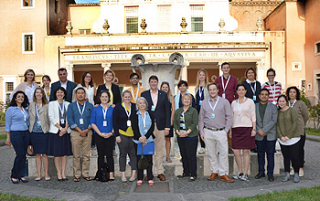 On 16-20 October, ICCROM hosted a design workshop on First Aid for Cultural Heritage in Times of Crisis (FAC), organized in partnership with the Smithsonian Institution, USA and the Prince Claus Fund, the Netherlands. Other partner institutions participating include UNESCO, CRAterre (France), Italian Civil Protection, and Ritsumeikan University (Japan).

The design workshop aimed to review the existing First Aid international training, and identify content as well as activities for developing a self sustainable and effective network of cultural first aiders. Using the human centred design approach, the workshop drew on the diverse experiences of former participants, practitioners, and key resource people to:

The overall aim of the FAC partners is to ensure timely and effective responses for protecting cultural heritage, which are embedded within national and international humanitarian assistance mechanisms.

Initiated in 2010, the first three editions of the FAC international course focused on the protection of cultural heritage in times of conflict, and were supported by the Italian Ministry of Culture. The scope of training was subsequently expanded to include natural disasters, and was offered in 2015 with the support of new partners including the Netherlands National Commission for UNESCO and the Smithsonian Institution. After 5 international courses, 40 shorter versions of the FAC training have been offered in different parts of the world. Of these the Prince Claus Fund has funded 27 workshops in 21 risk prone countries as part of a formal follow-up of the training. This number however, does not include the FAC workshops offered by the ICCROM-ATHAR Centre. The most recent workshop was held in August 2017 in Homs, Syria by a FAC 2016 participant, who also has taught at the ICCROM-ATHAR course held in October 2016.

The collective experience of the training has helped to develop a three step framework for first aid for cultural heritage in complex emergencies, which has been tested in eight natural disasters and three ongoing conflicts. Last year ICCROM in collaboration with UNESCO brought out a handbook on Emergency Evacuation of Endangered Heritage Collections, which received positive review from IIC. It is free for download and is being translated in Arabic, French, Spanish, Turkish, Georgian, Russian, Malay and Japanese. The evacuation handbook was also used by emergency responders during the recent hurricanes that affected the Caribbean and the United States.

This year, the Italian Civil Protection invited ICCROM to lead its regional training and train civil protection teams from six countries using the First Aid framework. The aim was to integrate first aid for cultural heritage into national emergency management systems. The UK and the US military and Interpol have also expressed strong interest in using the FAC methodology to train emergency responders. The design workshop therefore will help to identify training strategies as well as tools for mainstream emergency actors.