First Aid to Cultural Heritage in… 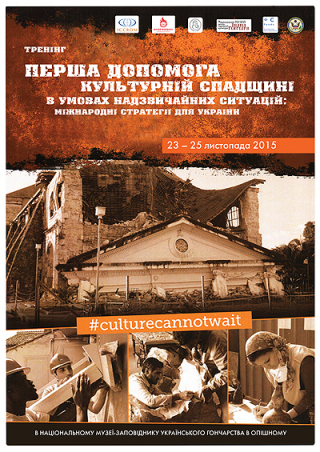 The National Museum of Ukranian Pottery in Opishne recently hosted a workshop on “First Aid to Cultural Heritage in Times of Crisis: International Strategies for Ukraine”, an event inspired by the ICCROM First Aid (FAC) course held earlier this spring in Amsterdam in partnership with the Smithsonian Institution, the Netherlands National Commission for UNESCO and several local collaborators.

Using the FAC methodology and curriculum, the three-day event in Ukraine was created in response to the country’s multiple challenges and threats. The Maidan civil movement and armed conflict in eastern Ukraine have endangered hundreds of museums and heritage places. As a result, there is a crucial need to strengthen knowledge on various aspects of disaster risk management in order to devise strategies and plans to reduce risks of damage to cultural heritage. It is also vital that international policies and efforts are integrated into national and local practices and capacities are built so that communities are more resilient and able to take action in a crisis situation.

The 28 participants were selected on a competitive basis and represented a broad range of museums – small and large, state-run and private, national, regional, local – as well as cultural institutions and professional organizations operating in regions affected by conflict and risk. Four of the six trainers have previously attended ICCROM First Aid training in Moldova (2014) and the Netherlands (2015).

An outcome of this programme has been the development of a network of well-trained “First Aiders”, able to act in an emergency. The workshop was also organized to raise awareness to cultural heritage protection and promote the adhesion of Ukraine to ICCROM’s Member States.

The workshop combined practical sessions and simulations with theory, providing participants with ideas and skills for creating evacuation plans and stabilizing heritage under threat, while at the same time covering topics such as cost effective strategies, ethics and documentation. 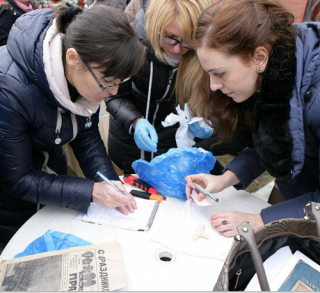 It was co-organized by the Maidan Museum NGO, the National Centre of Folk Culture – Ivan Honchar Museum and the National Museum of Ukrainian Pottery in Opishne in cooperation with Blue Shield Ukraine, ICOM Ukraine, and the Ministry of Culture of Ukraine. The project curator was Ihor Poshyvailo, participant of the 2015 FAC course in the Netherlands, Chairman of the Maidan Museum NGO, Deputy Director of the National Centre of Folk Culture, member of the Museum Council at the Ministry of Culture and member of the Museum Security Volunteering Committee.

ICCROM considers its alumni to be one of its greatest resources. The goal of our courses is for participants to return to their home countries and institutions, sharing what they have learned. In this way, our training makes for a tangible and felt impact.

“First Aid to Cultural Heritage in Times of Crisis: International Strategies for Ukraine” was made possible thanks to funding by the Prince Claus Fund under its Cultural Emergency Response Programme and the US Embassy in Ukraine Alumni Programme.