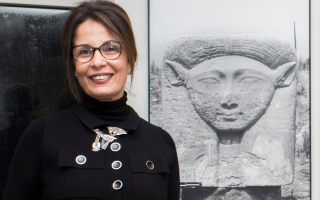 On 12 January 2021, Dr Gihane Zaki, ICCROM Council Member and Professor of Egyptology who is currently Researcher at the French National Center CNRS-Sorbonne University, was appointed by the President of the Arab Republic of Egypt from within the list of 28 selected personalities to join the newly-elected deputies of Parliament.

Born in 1966, Zaki was educated at the Catholic School Sacré-Coeur and studied Egyptology in Egypt and France, obtaining a doctorate in Lyon University in 2000. Zaki is the first holder of a  PhD in Egyptology to get into the Parliament since its creation. Based on her extensive experience in the international cultural heritage field, she has joined the Parliament Committee for Culture and Antiquities.

Throughout her career, she has combined culture and research with the realities of politics, firm in the belief that cultural diplomacy and dialogue can bring people together.

In 2012, Zaki came to Rome to head the Egyptian Academy of fine arts. Under her leadership during the seven years of this unique mandate in Italy's capital, the Egyptian Academy relaunched its cultural activities through international events and art exhibitions that were both academically rich and beautiful to behold.

Zaki was the first woman to head the Academy after 13 directors, leaving behind her remarkable cultural legacy of collaborations between institutions and civil society.

With ICCROM, Zaki has been highly engaged with the organization's activities, lending her knowledge and expertise to projects geared towards the Arab Region and the African continent. She was elected to ICCROM's Council in 2013 and has played an active role in this capacity ever since. Together with ICCROM, Zaki has played a strategic role in implementing fresh and innovative ideas to engage the African youth. Eager to shed light on how Egypt can support young people on the continent, she is also an advocate for women's pivotal role in African societies.

As Member of the Egyptian Parliament, she will continue to teach at the Sorbonne and remain associate Researcher for the prestigious National Research Centre (CNRS) in France. Gihane Zaki will be a great addition to revitalizing the Parliament's Culture and Archeology Committee. Zaki is a part of the 25 per cent share of the seats assigned by law to women, and she will sit in Parliament after the direct appointment by the head of state, Abdel Fatah al Sisi. The 596 deputies of the lower chamber are elected and appointed according to a hybrid system, whereby 284 candidates are selected through a two-round system, 284 are elected using closed party lists, and 28 are appointed directly by the head of state.

"It's all about culture. It widens the present dimensions, opens up the narrow perceptions and makes people look forward to experiencing untraditional things. Being born on the shore of the River Nile, I grew up and learned around the legendary Mediterranean sea,” says Zaki. “I could tell that passion and enthusiasm are the best teachings and the language of tolerance, dialogue and humanity are the best languages around the world."

ICCROM congratulates Zaki and wishes her success in this new role, where she will advocate at the highest level for cultural heritage, and its place in contributing to sustainable societies and well-being.