In Memory of Dr. Roland Silva

In Memory of Dr. Roland Silva 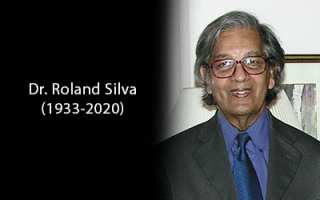 It is with great sadness that ICCROM acknowledges the death of Dr. Roland Silva, former Director General of Archaeology of Sri Lanka and former President of ICOMOS International.

Dr. Silva was a central figure in heritage conservation in Sri Lanka and was responsible conservation efforts at most of the key monuments and sites in the country.  He was the founder and Director General of the Central Cultural Fund which was an innovative institution which has underpinned the massive programme for conservation of heritage in Sri Lanka over the years. He created and headed the National Trust of Sri Lanka, ICOMOS Sri Lanka, and Sri Lanka Council of Archaeologists. He was also the Chancellor of the country’s premier technical university, Moratuwa.  He was responsible for Sri Lanka’s early implementation of the World Heritage Convention, overseeing the inscription of Sri Lanka’s first three World Heritage properties.

In 1990 Dr. Silva was elected President of ICOMOS International, a position he held for three terms until 1999. During this period, he helped consolidate ICOMOS’ international and scientific structure, encouraged the participation of Asian, African and Latin American professionals. During his tenure as President, he was successful in increasing the number of national committees of ICOMOS from 67 to 114 and international scientific committees from 12 to 25.  He also hosted one of the most memorable ICOMOS General Assemblies in 1993 in Sri Lanka.

He chaired the Nara Conference on Authenticity in 1994 leading to a rethinking of the concept of authenticity as it applies to cultural heritage.  Recipient of the Piero Gazzola Prize (1999) and the Fukuoka Arts and Culture Award (2004), he is the author of numerous academic publications on conservation, architecture and archaeology, particularly in an Asian context.

In regard to ICCROM, Dr. Silva was always a strong supporter of the organization as well as an important collaborator.  As mentioned, he studied at the ICCROM Architectural Conservation course in 1967, acknowledging that the course laid the foundations for his life-long practice of conservation.  Subsequently, he remained closely associated ICCROM as a resource person for training courses and by promoting an entirely new generation of conservation professionals in Sri Lanka to take part in various ICCROM activities. He ensured the presence of ICCROM in numerous international projects carried out by him in Sri Lanka including activities of the UNESCO-Sri Lanka Cultural Triangle project. His last appearance in Rome was in 2009 as a resource person for the Conservation of Built Heritage Course (CBH09), where he gave the “Distinguished Practitioner” lecture, sharing his lifetime experience with the participants. He was a guest of honor for the recently concluded ICCROM/IUCN Asian Regional Course on Promoting People-Centred Approaches to Conservation of Nature and Culture (PNC19) in November 2019 in Sri Lanka.  In recognition of his contributions to the organization, ICCROM Director General, Dr. Webber Ndoro recently was the chief guest at a ceremony which honored Dr. Silva in December 2019.

His 60 years of work in Sri Lanka provided an outstanding and unparalleled contribution to heritage sector in Sri Lanka and at the international level. ICCROM expresses its condolences to his family and friends as well as the entire conservation community in Sri Lanka and worldwide.

In memory of Dr. Roland Silva