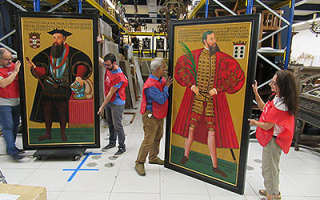 The participants were all museum professionals. Seventeen came from Portugal (of which seven were coaches), and the remaining nine came from other regions of the world.

The purpose of the workshop was to familiarize the participants with the RE-ORG method, developed by ICCROM and UNESCO in collaboration with the Canadian Conservation Institute (CCI) in order to assist museums worldwide in making improvements to existing storage areas.

The participants worked with important collections from the Lisbon Museum (ceramics, paintings, textiles, graphic documents and furniture). They practiced every step of the method, from preparation and condition assessment, to planning and implementing the reorganization project. At the end of the two weeks, six storage rooms with a total surface of 802 m2 were reorganized. 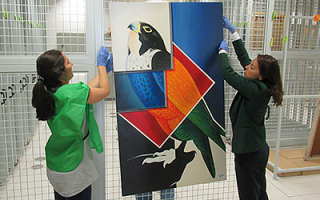 During the workshop, the participants also had the opportunity to present and discuss their own RE-ORG projects, which they will implement in their respective museums. They will remain in contact with the RE-ORG network and ICCROM for advice and support after the workshop. Thanks to this experience, the coaches will be better equipped to share the method in spinoff workshops elsewhere.

As one participant put it, "it is amazing how the most obvious things are also the most difficult to achieve. It is so enriching being here, sharing time and experiences with those colleagues."

One of the greatest achievements of this workshop is that the storage areas of the Lisbon Museum can now be opened to visitors. The museum plans to arrange visits for groups of up to 15 people.

Isabel Raposo, a member of ICCROM’s Council who followed the progress and visited the participants several times, commented: “The storage rooms were immense and numerous, the objects all so diverse in dimensions and types. Yet all was reorganized in two weeks! For both participants and the museum, this is a life-changing experience.”

At the final ceremony, museum director Joanna Monteiro complimented the participants. “RE-ORG Lisboa was one of the most important projects the Lisbon Museum has been dedicated to over the past three years," she said. "The results totally matched our goals by achieving very good conditions in the museum’s main storage area and in keeping thousands of objects in the best possible conservation conditions. In fact, the result surpassed the original plan. For the first time, we can now have a part of the storage designed to be publicly accessible, just as we dreamed.”

Download the RE-ORG method in English, French, Spanish and Portuguese!