ICCROM at an EU Module Exercise 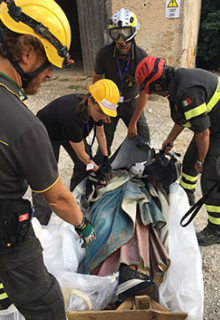 When a major disaster strikes, urban search and rescue (USAR) teams, under the coordination of the International Search and Rescue Advisory Group (INSARAG), are deployed within several hours. In these first moments, especially when disaster debris is removed, the affected region stands to lose most of its significant cultural heritage. Due to the extensive loss of cultural heritage during these first stages of a crisis, ICCROM has been striving to promote the integration of cultural heritage first aid into existing international guidelines for humanitarian aid and search and rescue operations.

Based on its long experience with preserving cultural heritage in emergency situations, ICCROM, in collaboration with ICOMOS-ICORP Turkey and the Dipartimento della Protezione Civile (Italian Civil Protection Department for Cultural Heritage), was invited to participate at the European Union Module Exercise (EU-ModEx) that took place in Poggioreale, Italy. From 16 – 19 July 2019, more than 150 international emergency rescuers from Czech Republic, France, Israel, Morocco and the United Kingdom met to improve and test their self-sufficiency, interoperability, efficiency of deployment, search and rescue, and first aid operations. Dr Zeynep Gül Ünal (ICORP Turkey and GEA search and rescue team member) and ICCROM interns Alessandra Macedonio and Romana Delaporte took part in the exercise by collaborating alongside the teams in the protection of cultural heritage in the “aftermath of a disaster”.

Poggioreale, a village frozen in time destroyed during a 1968 earthquake in Sicily, provided the perfect scenario for this joint activity. The ruins are a protected cultural site and are a real red zone – an area with potential danger due to its unstable structures. The main aim of having ICCROM join this exercise was to ensure that when the search and rescue teams arrived at the affected site, they could guarantee the safeguarding of cultural property, without compromising their primary goal: to save lives. 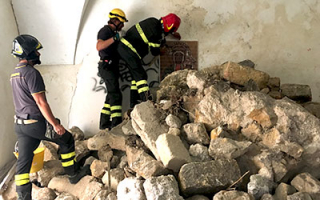 In the long and intense week, with less than five hours of sleep per day, ICCROM together with ICOMOS-ICORP Turkey participated in meetings with the team leaders, local emergency, and cultural heritage and municipality representatives. Engaged in hands-on exercises to rescue valuable objects together with the teams, ICCROM and ICOMOS-ICORP Turkey also had the opportunity to discuss diverse scenarios involving heritage assets in an emergency.