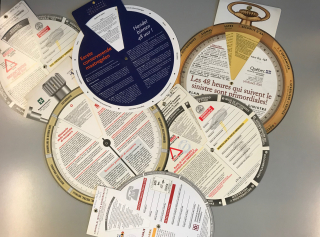 The Library’s first contribution to the Resource of the Month in November 2020 ended with a consideration on the difficulties of today, with the pandemic conditioning most aspects of our lives, including our study and learning possibilities. Five months later, the situation remains the same and will probably not change significantly in the near future. Thus, for this month’s contribution we would like stay on topic of disaster risk management and highlight a resource that was developed in the United States around 25 years ago by the National Task Force for Emergency Response: the Emergency Response and Salvage Wheel. This task force was a joint initiative of the National Institute for the Conservation of Cultural Property (NIC), the Federal Emergency Management Agency (FEMA), and the Getty Conservation Institute.

Remember, in those times, mobile devices were used only for calling each other and few of us knew what an “app” was. At that time, the invention of this simple, paper-based tool that was easily portable and human-readable without the use of technical equipment, was an innovative way to offer concise practical information on protecting collections in emergencies.

Why is this resource called a “wheel”? It consists of three cardboard circles: a bigger one in the middle and two smaller one on each side, held together with a button in the centre allowing the rotation of the two external circles. By rotating the small circles according to specific topics indicated on the edge of the central circle, for example “Salvage Priorities”, “Damage Assessment”, or “Documentation”, a corresponding window displays the most important considerations on this aspect. The wheel was designed as a tool for professionals working with collections in order to provide them with the essential information on how best to respond to an emergency within the first 48 hours.

After its launch in 1997, the wheel was distributed to nearly 50 000 cultural institutions in the United States, and afterwards sold for less than $10 each. It was soon translated into many languages, and the ICCROM Library holds the English, French, Spanish, Italian, Serbian and Dutch versions. Of course, today in our high-tech society, the wheel may seem old-fashioned, but it certainly has an important place in the history of the development of functional tools and resources for emergency response.