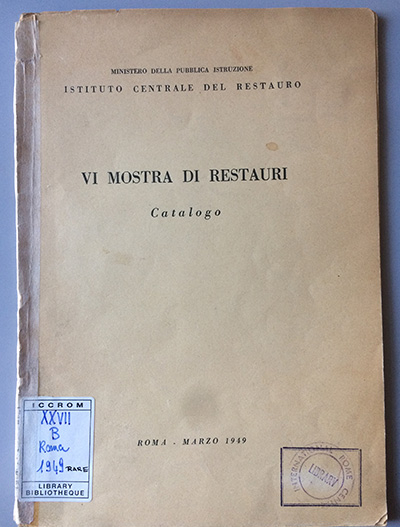 Monthly alternating with the Archive, this section displays special features of the library of ICCROM, giving an insight into the varied resources of this important collection.

The first “treasure” in this collection is this small volume: yellowed paper, counting only 20 pages plus another 20 pages of b&w plates, printed in 1949 in Rome. The authors of the texts are Cesare Brandi, Licia Borelli, Michelangelo Cagiano de Azevedo; Cesare Brandi himself wrote the foreword, the author of Teoria del Restauro (Theory of Restoration), published in 1963 and translated in many languages.

“VI mostra di restauri” is the exhibition catalogue of restored objects and photographic documentation of conservation treatments conducted during the year 1948 by the Italian Istituto Centrale del Restauro (Central Institute of Conservation), the first institute and school of conservation in Italy created by the Italian Government in 1939. Most of the objects were war-damaged artworks, which had suffered from the direct destruction of monuments where they were located or indirect causes linked to the conflict, as for example inadequate transport or storage conditions.

In this exhibition, the visitor had for example the chance to appreciate the documentation of the rearrangement of badly damaged frescoes in the Camposanto in Pisa, where a fire had burned the roof in 1944. To save the majority of the paintings, not only part of the painted surfaces itself, but also the fragments of the preparatory layers with the Sinopia, the red preparatory drawing, they were puzzled together on new supports, with the intention to be re-placed later in correspondence with the lacunae on the wall. 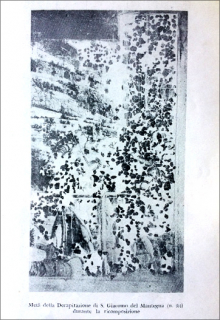 Another part of the exhibition was dedicated to the badly war-damaged Main Chapel and Capella Ovetari in the Chiesa degli Eremitani in Padova, bombed in 1944. Many displayed pieces showed the partial reconstruction of small parts of the decorations: “2 fragments of decoration (…)”, “7 fragments of decorations (...)” etc., but visitors could admire also large size masterpieces, as for example Mantegna’s decapitation of S. Giacomo (1475). This fresco hardly survived the destruction, fragmented in many hundreds of pieces, which had been collected carefully after the bombing and then reconstructed with the aid of a photographically impressed canvas, with the image of the real-size painting before its destruction over it. (PICTURE) Responsible for this reconstruction is one of the most important personalities in mural painting conservation and restoration during those years, Mr Paolo Mora, the “soul of these reconstructions”, as he is referred to by Cesare Brandi in the introduction of the catalogue.

Many years later, Paolo Mora, together with his wife Laura Mora Sbordoni and Paul Philippot, in those years Director of ICCROM, will put together their long-year experiences and expertise in the field in writing together a ground-breaking reference work on wall paintings conservation: La conservation des peintures murales (1977).

Why did we choose this resource for this first contribution? It is the strength of will and constant effort paired with high technical skills that enabled those early conservators to put the pieces of a fragmented (cultural) reality together again in the immediate aftermath of World War II – this can perhaps be seen as a sign of hope and an encouragement for other difficult times, such as the one we’re living in today during the Covid-19 pandemic.