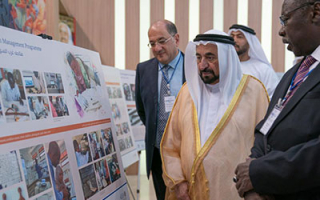 Under the patronage and presence of His Highness Sheikh Dr. Sultan bin Mohammed Al Qasimi, Supreme Council Member and Ruler of Sharjah, the ICCROM-Sharjah Regional Office for the Conservation and Restoration of Cultural Heritage organized a symposium from 23-26 September on conserving Sudanese heritage titled, “Active Exhibitions for Active Museums”.

The symposium is part of the larger “Community Museums of Western Sudan” (WCAM) conservation and rehabilitation project for three museums, funded by the British Council’s Cultural Protection Fund – established to protect cultural heritage at risk due to conflict in the Middle East and North Africa. The Project was granted a Major Award of nearly £1,000,000 and began on-site in September 2018 for a period of two years. The project partners are Sudan’s National Corporation for Antiquities and Museums (NCAM), Mallinson Architects & Engineers, and Cambridge University’s Macdonald Archaeological Institute Heritage Centre.

H.H. Dr. Sheikh Sultan bin Muhammad Al Qasimi, Supreme Council Member and Ruler of Sharjah, has highlighted the importance of preserving the rich heritage of Sudan, shedding light on the positive impact of preserving Sudanese heritage in fostering a sense of belonging and shaping the future. This came during the speech delivered by the ruler of Sharjah at the opening ceremony of the symposium, which was attended by 15 members of the General Authority of Antiquities and Museums in Sudan headed by Dr. Abdul Rahman Ali, Director of the Authority. The opening ceremony was also attended by the Minister of Culture, Antiquities and Tourism of the Republic of Iraq, Dr. Abdul Amir Al Hamdani, representing the British Council – Heritage Protection Fund in the UAE, Mr. Gavin Anderson.

Dr. Zaki Aslan, Director of the ICCROM-Sharjah Regional Centre for Cultural Heritage Conservation in the Arab World, delivered a welcoming speech in which he thanked and appreciated the ruler of Sharjah for his continuous support and wise guidance in supporting cultural and heritage efforts in various Arab countries, underscoring his keenness to restore and preserve archaeological sites. 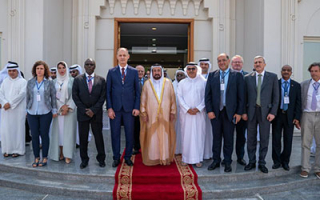 Dr. Zaki Aslan reviewed the Center’s current projects and initiatives in preserving the cultural heritage, stressing the Center’s remarkable role, in cooperation with partners, in restoring a number of sites in the Arab countries such as the reconstruction of the Nuri Mosque in Iraq.

Concerning the WCAM project, Dr. Zaki Aslan stated, “The project aims to help the NCAM to develop a community-centered vision for its museums. This symposium aims to enhance the prospects of preserving the distinctive cultural heritage of sites, museums and buildings that have been neglected and abandoned but remain important in the national memory as a symbol of the Western Sudan civilization and the Sudanese society”.

Dr. Abdul Rahman Ali Mohamed Rahma, the Director-General of the General Authority for Antiquities and Museums in Sudan, appreciated the support of Dr. Sultan Al Qasimi in restoring the three archaeological museums in Sudan, and highlighting the country’s valuable arts, history and culture.

During the symposium, H.H. Sultan discussed the importance of Sudan’s strategic geographical position, its diverse history and the importance of preserving its heritage. He also underscored the importance of caring for members of the local community. Concluding his speech, Sheikh Sultan wished success and best of luck in future joint projects that aim to strengthen the preservation of the Sudanese heritage, affirming his support for all the cultural projects for the reconstruction of Sudan.
The ruler of Sharjah toured the accompanying exhibition which included the areas of restoration being worked on in the three museums in western Sudan. H.H. was also briefed by the Sudanese delegation on the progress of work in these museums.

The workshop will last 4 days and will be attended by a group of decision-makers and professionals from the NCAM, the Syndicate of Engineers and Universities in Sudan and a group of international and Arab experts specialized in the development of the community educational exhibitions in museum.