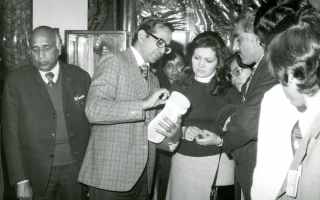 ICCROM joins the international conservation community in expressing sadness at the passing of long-time collaborator and former Council Member Dr. Om Prakash Agrawal on the evening of 15 August 2021, aged 90 years.

In 1952, the then 22-year-old chemist joined the Archaeological Survey of India, under the mentorship of T.R. Gairola, at a time when the impact of science on conservation was still new. It was the start of a brilliant career during which Dr. Agrawal welcomed to India influential figures such as Dr. H.P. Plenderleith, Paul Philippot, Giorgio Torraca and Garry Thomson. Between the 1970s and 1990s, Dr. Agrawal travelled to Europe annually to visit the major conservation laboratories, becoming the Indian ambassador in the field. In turn, he acted as European ambassador in his own country.

In 1976, Dr. Agrawal created the National Research Laboratory for the Conservation of Cultural Property (NRLC), the first of its kind, in his hometown of Lucknow in Uttar Pradesh, where he served as Director until 1985. At NRLC, he trained numerous generations of young conservation professionals in India and had a hand in establishing conservation centres in other Indian states, as well as in countries such as Sri Lanka, Thailand, and Malaysia. Other roles held by Dr. Agrawal included Head of Conservation at the National Museum of Delhi, President of the Indian Association for the Study of Cultural Property (IASC), and President of the Museums Association of India. He also helped found the Indian National Trust for Art and Cultural Heritage (INTACH) in 1984, serving as its Director-General, and led several notable missions to Iraq for UNESCO.

Dr. Agrawal had a long and valued association with ICCROM, including two periods as a Council Member from 1971–1978 (serving as Vice-Chair from 1975–1976) and 1984–1989 (serving on the Finance and Programme Committee from 1988–1989). He was an Honorary Representative of ICCROM for South and South-East Asia, driving collaboration between ICCROM and NRLC to ensure the entire region benefited from training, technical cooperation and workshops. Dr. Agrawal was also Indian delegate to ICCROM’s General Assembly, and a mission expert and lecturer, as well as author of several ICCROM publications on conservation in tropical climates. He was a recipient of the ICCROM Award in 1993.

Director-General Webber Ndoro and ICCROM staff wish to pay tribute to the remarkable legacy of Dr. Agrawal and offer their heartfelt condolences to his family and colleagues.