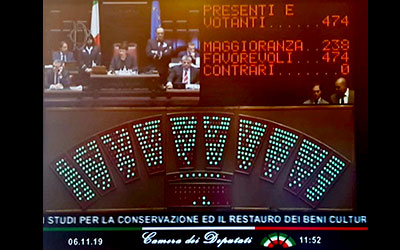 The Italian Chamber of Deputies gave the green light to the ratification and execution of the exchange of letters between Italy and ICCROM. This follows the approval at the Senate. MP Mirella Emiliozzi (Five Star Movement): keeping ICCROM’s headquarters in our country is of great interest and of particular relevance.

Final approval was given unanimously on 6 November in the Chamber of Deputies, with 474 votes in favour of the draft bill already approved by the Senate. The measure ratifies an agreement accorded through the exchange of letters between ICCROM and Italy on 17 March 2017, which amends the Headquarters Agreement of 27 April 1957 signed by UNESCO and Italy for the establishment and legal status of ICCROM on the Italian territory.

This news coincides with the 60th Anniversary of the Centre becoming operational in Italy.
“Understanding ICCROM as one of the first UN agencies to be established in Italy – thanks to the undisputed prestige and pre-eminence that our country enjoys in the field of cultural heritage conservation and restoration, and also from an economic point of view –guarantees returns connected to the supply of goods and services by companies in the country, as well as those connected to the Organization’s international personnel who reside in Italy. The maintenance of a headquarter in our country is of great interest and particular relevance”, underlined the Honourable Mirella Emiliozzi of the Five Star Movement, presenting the provision.

The bill extends the privileges and immunities of the 1947 Convention on the Privileges and Immunities of the United Nations to all staff without exceptions. Though the Italian Government had ratified the Convention in 1985, and in 1992 included ICCROM in the list of institutions to enjoy the privileges and immunities, it was requested that an additional agreement be drafted which would ensure the correct interpretation of the Convention in relation to ICCROM’s Headquarters Agreement.

While the agreement was signed on 17 March 2017, the ability to move forward was interrupted by a change of legislature in Italy at the end of the same year. With the new legislature, the process has now finally been completed.

The Vice-Minister of Foreign Affairs, Emanuela Claudia Del Re pre-announced the positive outcome during the inaugural session of ICCROM’s General Assembly on 30 October, stating that “the parliamentary ratification process of the amendment to the Headquarters Agreement has now reached its final stage in the Lower Chamber and is close to conclusion. Thanks to this ratification, ICCROM will finally gain the recognition and legal status envisaged by the 1947 Convention on Privileges and Immunities.”

The illustrative report presented to the Chamber of Deputies reads that ICCROM is: