Under the patronage of H.H Sheikh Dr Sultan Bin Muhammad Al Qasimi, Member of the Supreme Council and the Ruler of Sharjah, ICCROM-Sharjah has announced the jury for the third cycle of the Award for Good Practices in Cultural Heritage Conservation and Management in the Arab Region (2021-2022).

In every biennial cycle, the jury is selected from among many distinguished and well-known experts and specialists at both Arab and international levels. This year, the seven independent members represent several scientific, academic and cultural backgrounds that are closely related to the themes and objectives of the Award, including the fields of architecture, restoration and preservation of tangible and intangible cultural heritage, museum, libraries, and others. 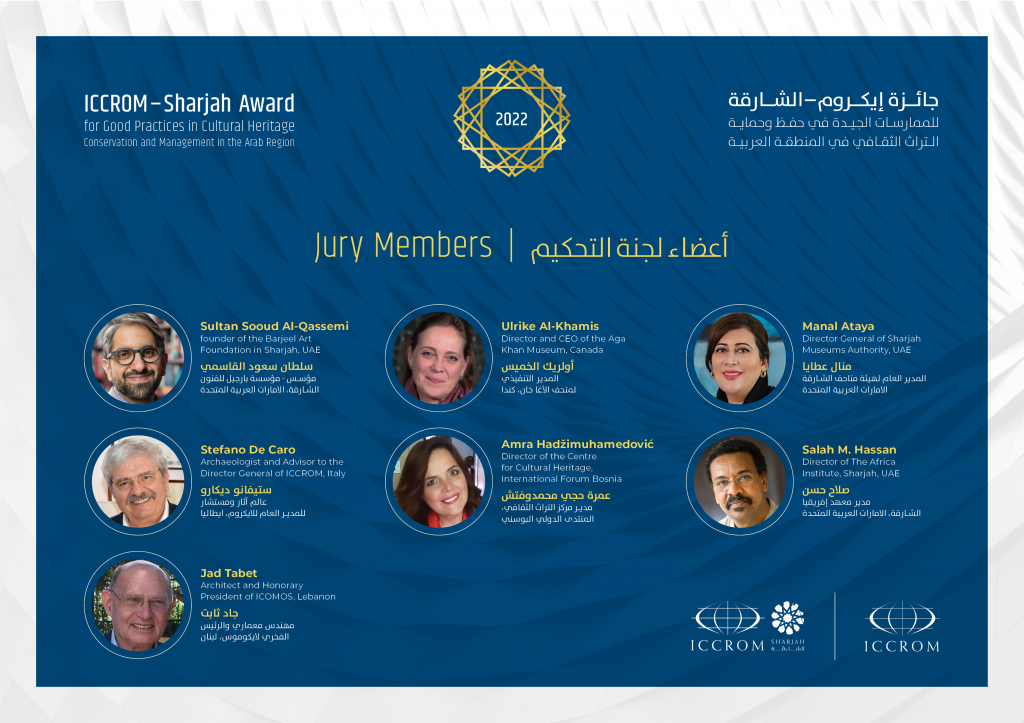 The jury will meet later this month to review and shortlist the entries to the award. The winning projects will be announced at a special ceremony in Sharjah in May.

More about the award

The ICCROM-Sharjah Award for Good Practices in Cultural Heritage Conservation and Management in the Arab Region was first launched in 2017. It aims to honor and reward outstanding work contributing to the protection and vitality of tangible cultural heritage in the Arab world, with two main categories:

In the award’s previous cycle, the Grand Award for the first category was won by a project funded and implemented by the Aga Khan Development Network, which rehabilitated Souk al-Saqatiya in Aleppo, Syria. The Grand Award for the second category won by a project called Digitizing and First Aid to Documentary Heritage of Manuscripts Collection of the Great Omari Mosque Library, presented by the University College of Applied Sciences in Gaza, Palestine.