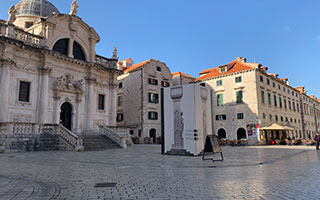 1. The Orlando Column has stood for more than 600 years in the middle of Luža Square in the old city of Dubrovnik. Photo credit: Dennis Jarvis from Halifax, Canada - Croatia-01585B, CC BY-SA 2.0, https://commons.wikimedia.org/w/index.php?curid=6693459
2. Since 2019 the Orlando Column has been behind a protective enclosure while investigations continue. It is hoped that the column will soon once again be visible to the public.
3. In 2006-7 a hole was bored through the monument, into which a pre-stressed stainless steel pin was inserted and fixed with epoxy resin. This intervention caused the column to crack severely. The team investigate whether the pin and epoxy are still causing problems.
4. ICCROM team member David Odgers undertakes a detailed condition assessment of the stonework
5. In some places the cracks extend right through the depth of the monument
6. The ICCROM team (Matteo Francini, David Odgers and Alison Heritage), together colleagues Vinka Marinković and Borka Milković from the Croatian Conservation Institute.